I’m back again with another article on the Oscar Nominated Animated Shorts. 2018 was a satisfying year for shorts as all the nominees were entertaining and moving in their own way. Although Lou’s animation and Garden Party’s ending were fantastic, it’s the characters, humor, and voice acting of Revolting Rhymes that make it my pick for best ONAS of 2018. Let’s dive in.

The weakest of the five shorts although that does not mean I disliked it. Far from it, the pencil animated styles stood out strongly against the plethora of computer-model shorts from this year and the narrative was definitely it’s own thing (plus the score was quite moving thanks to John Williams). Dear Basketball, which focuses on Kobe Bryant’s basketball career, makes it this year’s memoir short along with Negative Space. Although it was nice, it falls flat for two main reasons. The first was the deflated story.   There wasn’t much conflict or pivotal moments to keep the story going. What’s more, this memoir short was too positive on Bryant’s basketball career and did not bring much in the way of sorrow or negative memories. It definitely paints Bryant in a positive light which makes it feel more self-adorning, and unfortunately egotistical, than self-reflecting. I will say the scene when Bryant mourns his aging body was great as the style shifted jarringly and really communicated how debilitating that was for him. Beyond that, nothing much else to say.

The other memoir short also stood out for its style and the premise and, unlike Dear Basketball, had a healthy mixture of positive and negative memories. Unfortunately, Negative Space’s story felt a bit clipped. At first I laughed at the line “there’s too much negative space” in the funeral scene but then I was astonished when the credits rolled after that. What I took as a comedic line was instead a somber reflection at how careless the coffin was created for the protagonist’s father. With such a quick ending, I felt cheated, as if the story was going somewhere but then decided to pull the plug half way through. With that said, I do like how much thought went into animating the background and the luggage as it really highlights the unique father-son bond the main character has.

What an ending! This was Mary’s favorite and I liked this one as well. It took me awhile before I realized what exactly was going on. Eventually, I was thinking an apocalyptic event happened and nature was reclaiming lost territory. My prediction was almost completely wrong but I’m happy that I was. What I find so compelling about this short are the frogs as they look so realistic but…not? It’s like the frog-version of the Uncanny Valley which I find amusing to think about. I think this quasi-realistic quality helps make the shocking ending great as the bloated decomposing man is so repulsive against the cute and adorable antics of the frogs. So funny. 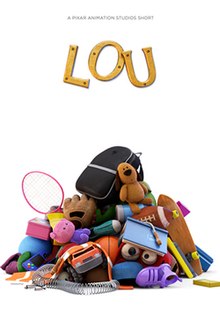 Out of the five shorts, I predict Lou will win the Oscar. The story is nothing to write much about but Goddamn is Lou’s animation fantastic. You could tell the animators tirelessly planned and animated Lou’s movement to the insanity that his anatomy would let him. The whole chase scene with the kid was great, I could watch that scene dozens of times. Other than that the only other thing I have to comment is, did anyone else experience an existential crisis when the kid took all of Lou’s belongings and gave them to the kids?   Like, where did Lou go? Is his personality split up? Is he gone? Does he come back when the kids eventually lose their stuff again? The toys in Toy Story got nothing on Lou. Entertaining and energetic short but that’s not enough to make it my favorite for this year.

I went to see the shorts with Mary and my friend Kaitlin and all of us agreed that this was one of our favorites if not the favorite of the five shorts. Where to being on it? First, the short’s length was spent fantastically as no minute felt wasted. The characters, the pacing, the style, the voices, the humor all coincided perfectly to match Roald Dahl’s twistedness. There are so many things I loved about Revolting Rhymes. Like how the Mirror was animated very different compared to the rest of the characters indicating otherworldliness to him. Red and Snow White’s friendship felt believable and the Wolf’s revenge was not hackneyed or farcical.   And unlike Negative Space’s ending where I felt cheated, I felt satisfied but intrigued by Revolting Rhymes’ ending. Curious how the story could continue but content if this was the true ending. Not to say that it is, mind you, as it is Part 1. I really want to watch Part 2 and see how everything plays off.

If there’s one major criticism I had about the short its Red and Snow White’s “friendship.” Yes, I love their relationship but come on, they’re totally in lesbians with each other. Don’t give me this bs they are friends. They should be married. Sorry it just seems so painfully obvious they love each other but the short says otherwise. Come on.

See you at the Oscars!