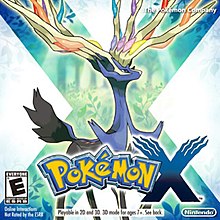 If I may be frank, Pokémon X and Y are among the best (if not the best) games to do a Monotype (or Single Type) Run.  Pick almost any type and you’re guaranteed a fantastic time, even Ice and Dragon are doable to a degree.  With over 400 Pokemon available in these games lot of types neutralize their weaknesses and can be caught before the first gym.  So what would your team look like? Let’s take a look but first…

To give a cop-out answer, almost all the types in these games are great for a Monotype Run.  I’m serious, pick a type and you’re bound to have a good time.  But what if you want the very best? In my opinion, the best of the best are Flying, Water, and Fighting.  What these three types have in common are high diversity of strong Pokemon.  You can have multiple variations of each type and easily cover their weaknesses.  The hardest thing about their runs is picking your final six. I myself did a Fighting Run recently and it was tough for me to narrow it down.  You have Chesnaught, Lucario, Toxicroak, Hawlucha, and so forth who can give you a great diversity of moves. Water Pokemon can give you a healthy team for role diversity in terms of defense, support, and attack (and Greninja is always nice).  Flying Type also has a lot of gems, most notably Gliscor, Charizard, and Honchkrow. All of these types are available very early and consistently give you new Pokemon to play with as you progress.

Like I said before, even the “worst” types in the game are still not bad, especially compared to the other games.  But the worst would probably be Rock as it’s available relatively late compared to the other types.  The first pokemon you can catch, Dwebble and Binnacle, are available shortly before you get to the second gym.  Still though, this may be one of the best Rock Type runs in Pokemon due to the sheer abundance and diversity of them.  You neutralize your weaknesses right off the bat thanks to the aforementioned Dwebble and Binnacle! So how about that?  Also, when you arrive to Glittering Cave, shortly afterwards, you can catch a Solrock, Lunatone, Onix, and a Rhyhorn! So you go from drought to deluge in almost an instant!  Also, you can’t go wrong with Tyrantrum.

Dragon, Ice, Ghost, and Fire would be the other subpar types in these games but still, not too bad.  For Dragon Pokemon, you get your first Pokemon, whether a Charmander or Axew, after the first gym and you have some weaknesses to watch out for.  Still, this is a pretty solid team. Hydreigon, Garchomp, potentially Mega-Charizard X and Dragalge, and others give you a nice solid, strong team to fight with!  Fire Pokemon also have weaknesses to Rock and, for Y, Water but at least you have Fennekin as your starter so you can play Fire right from the get go.

Rock
Ideal Team: Tyrantrum, Barbaracle, Crustle, Aerodactyl, Probopass/Aggron (X), Tyranitar (Y)/Lunatone
Optional: Solrock, Aurorus, Relicanth, Rhydon, Onix, Boldore, Carbink, Corsola, Graveler, Magcargo, Shuckle, Sudowoodo
First Pokémon: Dwebble and Binacle via Rock Smash in Ambrette Town.  This is well into the game but is still before the second gym. Get the Rock Smash TM from the girl outside of the Aquarium.  You can then get Rhyhorn, Onix, Solrock, and Lunatone almost immediately afterwards in Glittering Cave with the fossils following shortly afterwards.
Weaknesses Covered? Yes