Godzilla: The Half-Century War by James Stokoe is a short but stellar comic book series that does the big G justice.  The plot focuses on soldier-turned-“glorified weather watcher” Ota Murakami who documents his run ins with Godzilla since his first attack on Japan in 1954.  As his Godzilla obsession takes control of his life, Ota tries desperately to stop the King while simultaneously thwart Dr. Deverich from destroying mankind with his monster attraction device.

Great read; here are some of my favorite points (warning, some spoilers)

–The art is appealing to look at.  James Stokoe enthralls you with his art which is both clean and sharp.  The setting is bathed in an eternal sunset of colors which compliments the dour nature of the comic.  The only bright moments seem to come from Godzilla’s radioactive breath and his glowing dorsal spines.  Also, Godzilla and his monsters look good which is always a bonus.

–The nods to the films are appreciated.  Stokoe respects the franchise and references many different things from them without having them seem out of place.  The weapons are one of them; from masers to black hole guns, whatever the Anti-Megalosaurus Force technology division came up with, it more than likely appeared in the films.  These references give the story familiarity without it losing originality.

Japan does not get a royal beating.  Japan gets attacked in the first issue but after that, Ota and Godzilla go global by “visiting” places like Vietnam, India, Ghana, and even Antarctica.  I like, it really drives the point that this is a global catastrophe.  Japan shouldn’t be a magnet of monster attacks, all the other nations should get a beating as well.

The specialized A.M.F. forces are amusing.  This is also one of my favorites.  When other monsters start popping up, the A.M.F. responded by making specialized forces for each of the monsters.  We only get to see these forces in one issue but they speak volumes.  I like it how the Mothra force are hippies who drive a van that has a psychedelic Mothra painted on it.  I also laughed at the Hedorah forces.  Poor guys, they look like they seen hell.  One of them wears a protective suit while the other one looks like he’s five minutes from meeting his grave.  I want to see adventures with these guys! 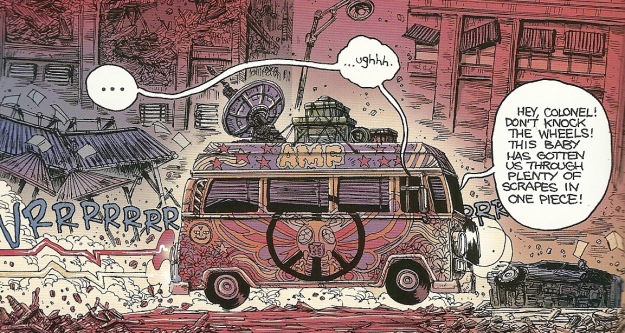 Godzilla’s bemused reaction.  I didn’t know it was possible to give Godzilla a facial expression but by God did Stokoe do it.    The look on Godzilla’s face when he realized his atomic breath didn’t work was funny without it being silly.  I like it.

In this end, this is a great series for you to read even if you’re not a Godzilla fan.  There are only five issues so you can easily get through it in a lunch break.  I haven’t read any other Godzilla comics but I doubt they can meet my expectations on a good Godzilla comic after Stokoe had set it so high.  Give it a shot.