9 Hours, 9 Persons, 9 Doors (999) is a visual novel game released on the Nintendo DS in 2010.  It is widely hailed as one of the best games on the Nintendo DS.  After hearing so much about it, I decided to try it out over the summer.

999 centers around nine people and their struggle to escape a sinking ship in nine hours.  They do this by going through a series of nine rooms.  These nine rooms are locked though and require you to solve a set of puzzles to unlock these rooms.

I’ve never seen a game use the Nintendo DS’ capabilities to this degree before.  The touch screen is lovingly applied and both screens are equally employed so there’s not a strong focus of one screen over the other.  I have also never seen a game take the DS’ hardware and twist it around in the game’s mind blowing ending.  It’s great.

999’s biggest feature though is its choose-your-own-adventure-style gameplay.  There are several endings to the game.  As you progress, you have to make a series of decisions that can affect the outcome of the game.  I guarantee you that you will not get the right ending the first time.  And don’t stress out about that!  The game highlights what decisions you have already made so when you reach that branching point, you can choose another path without having to worry if you had already made that choice or not.

Unfortunately, this means you have to go through a lot of dialogue and a few puzzles you have gone through before.  Luckily, you can simply press the B button and the game zips you through the dialogue and drops you to the first decision point.  You can’t skip through puzzles you have already done but since you know how to do them, you can breeze through them easily.  Even so, redoing of puzzles is probably the biggest criticism I have of this game.

Since this is a choose your own adventure, certain themes, ideas, and plot devices that are alluded to near the beginning of the game can be emphasized or dropped completely as you play through the different stories of the game.  That’s kind of cool.

The whole game has a definite creepy vibe to it.  I would say it’s tone is similar to Myst though with a great deal more character interaction and less mind-frustrating confusion.  I guess I should expand on this and say it reminds me of the classic point and click adventure games as the constant use of the touchscreen combined with the unsettling music really bring out the dire situation the characters find in this game. 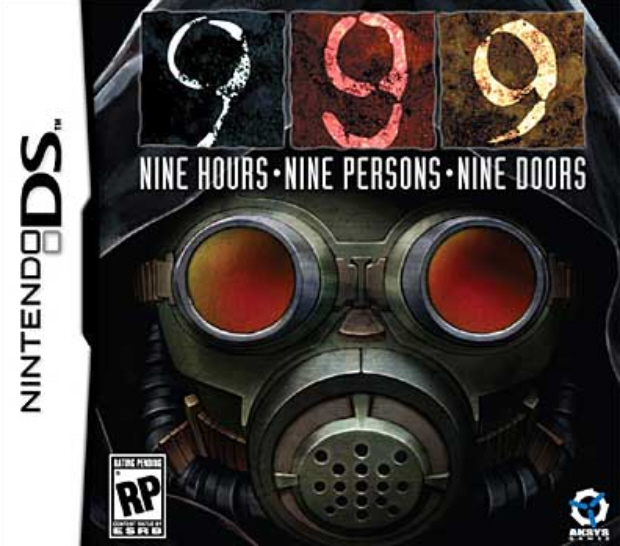 Speaking of which, definitely the biggest plus for this game would be the nine characters.  Each character is associated with a number such as the protagonist who is number 5.  Their numbers play a strong role in the game as you can’t progress through the nine different doors without using a certain combination of characters via their digital root.  So I can go through Door 5 for instance if I have say number 5, 6, and 3 (5+6+3=14, 1+4=5).

It’s through these different doors that you can interact with the nine characters on a more personal level.  As you play through the games, their slowly revealed backstories shed light on the mystery of why they are trapped on this sinking ship.  And boy these characters are great.

My favorites characters are probably Seven and Snake.  Seven at first seems like a dumb oaf but the more you get to know him the more you realized that he’s smart and pretty funny.  Snake, who’s blind, is a sympathetic character but is still nonetheless quite capable in taking care of himself.   Even the protagonist’s love interest, June, at first seems like the stereotypical, childhood friend-turned-sweetheart but holy crap the things she says to the protagonist can be either very funny or insane.  At first I outright didn’t like her because she seemed like a flat character but that slowly crumbled before my eyes.

In fact, most of the game is like that, things aren’t as they seem and certain ideas and assumptions you may have are thrown into a vat of water and dissolve before your very eyes.  I’m going to shut up about that because I don’t want to ruin any more of the fun you guys may have playing this game.

As you can tell, I like this game a lot.  If you are a fan of Phoenix Wright or Professor Layton, give this a shot.  If you haven’t played those two games then let me say this, there’s a lot of reading in this game and that can turn people off, I totally get that.  You don’t want to read you want to play a game!  But, if you don’t mind sitting back and take the story in, then you won’t be disappointed.  In the future, I’ll give my full thoughts on this game but for now, go to Amazon and buy this game!  It’s only 20 dollars new, you can’t argue that price for a game like this!

As a side note, I accomplished a unique milestone with this game.  I started it on my trip to Europe and finished it on my trip back in two weeks.  First time I completed a game out of the U.S.!