Up until about two years ago, I wasn’t watching Cartoon Network.  I mean, besides from Adult Swim, I had no interest in their daytime programs.

This changed over the 2012 summer when I was barraged with Cartoon Network’s 25th anniversary ads at San Diego Comic Con.  My girlfriend had also forced me to watch Adventure Time during this period.

Though I found Adventure Time appealing it was Regular Show that reeled me back into Cartoon Network.

There was a period during Cartoon Network’s history that many people refer as the “Golden Age of Cartoon Network.”  Though when these years started and ended can vary from person to person, the Cartoon Network wiki puts this age from 1996 (when Dexter’s Lab premiered) to 2004 (when the live action hosts replaced the cartoon hosts on Cartoon Cartoon Fridays and when Samurai Jack ended).  Many of Cartoon Network’s most famous shows premiered during this timeframe including Powerpuff Girls, Courage the Cowardly Dog, and Ed, Edd n Eddy.

Cartoon Cartoon Fridays was living it large as it took Friday nights and celebrated them.  This was not like your Saturday morning cartoons, no, these cartoons interacted with each other and hosted segments!  Toonami was at its peak during this time and I dare say it was one of the main reasons why a young generation of American kids got into anime.  That’s how good it was.

As the years progressed, shows were syndicated and canceled, blocks were moved around or disappeared altogether, and live action shows became more and more common for CN.  Many people refer to this era (including the wiki) as the “Dark Ages.”  Many fan articles and videos are filled with hatred and disgust while discussing this era of Cartoon Network. 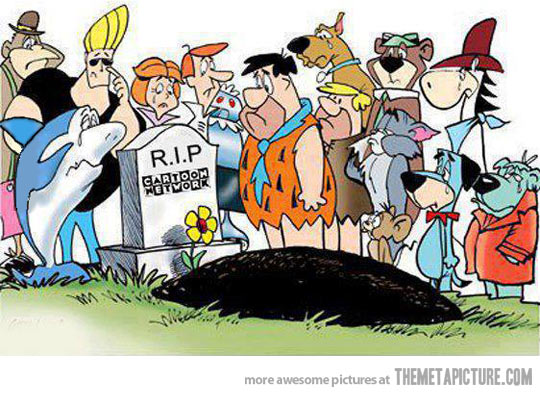 Image from http://themetapicture.com/r-i-p-cartoon-network/.
It’s very easy to find internet art despising new Cartoon Network. This image made me laugh because what are Hannah Barbara cartoons doing there? It’s so funny that it has to be a parody of the fan hate.

But what about now?

As I said before, I didn’t watch Cartoon Network until about two years ago.  By then, these two shows had developed a dedicated fan base (especially for Adventure Time).  Memes and jokes from these shows circulated the internet like a slow moving turtle.  By the time I sat down and watched them they had already become CN’s most popular shows.

Why?  Why do these two shows work?

The first thing that comes to my mind is that they are not annoying nor do they talk down to the audience.  The second thing is that they are original and feel fresh.  You could argue that Adventure Time’s motif of simple randomness has been done countless times before but I think not.  Behind Adventure Time’s random nature are deep storylines that connect loosely from episode to episode.  Actions have meaning behind them.  Actions have consequences.  We see both of these aspects as the series progress.

Regular Show though is on the opposite side of this spectrum.  While Adventure Time relies on child-like logic in a fantastical world, Regular Show relies on adult (albeit slacker)-like logic in a seemingly normal world.  Never have I seen a general audience cartoon hit on so many real world issues in a believable character setting (this is most true for the romantic episodes, especially in “I Like You Hi”).

Because of these two shows approach to hit a wide as audience as possible, Cartoon Network has seen an unbelievable success with them with both shows averaging between 2 to 3 million views an episode.  The success of these two shows brought with them four other moderately successful shows; The Amazing World of Gumball, Uncle Grandpa, Steven Universe, and Clarence.  All six of these shows (with the exception of Steven Universe which has yet to finish airing season 1) have been nominated or won various animated awards including the Emmys.

All six of these shows (with others on the side) remind me of the “Golden Age of Cartoon Network.”  Not only are they creative and well animated but they are diverse as well.  There’s a show that can appeal to anyone whether you like fantastical adventures, pop culture references, spontaneity humor, or well developed characters.  These are cartoons that anyone can seriously enjoy.

Sure, Cartoon Cartoon Fridays may be gone and all our old favorites may be on another channel but I say the “Dark Ages” are gone.  Cartoon Network is experiencing its own Renaissance right now.  And though you could view this as just a slight improvement where it once was several years ago, I say otherwise.  It’s a good time to be watching cartoons on Cartoon Network.

And hey, “Toonami is back bitches.”

Image from http://xeternalflamebryx.deviantart.com/art/Cartoon-Network-Never-One-Moment-440621220 This image has no bearing to the article I just stumbled upon it and I found it quite funny, yay for all the straight men/women!

4 thoughts on “The Cartoon Network Renaissance”