If you have been to my site before it is likely you have seen this guy above.  That’s Dunkleosteus, probably the most famous ancient fish to ever exist.  He is the paragon of placoderms, a carnivore nonpareil, and the very representative animal of the Devonian Period.

I wrote about Dunkleosteus in my first “Ancient Animals and their Fakemon” article where I talk about him and his fakemon counterpart, Clunklesteel.  While setting up the article I had to find appealing images of the placoderm so I could make the article stand out.  The drawing seen here was one of those images.

Unlike other images of art and photos where their source could easily be found, this image came up a blank.  Every time I found a site that hosted this image it directed me to a site which directed me to another site and so forth.  Some sites even came up blank citing no original source.  Eventually, I concluded that this image’s original source had either been deleted or lost to the maze of the internet and so I gave up and continued on with my article without citing anything for it.

As such, when the article was published, this image of a Dunkleosteus and his diver friend became the latest in a long line of sites that hosted the image without quoting the original source.  The article’s popularity had launched it so far up the Google Image chain that it became one of the top results for the “Dunkleosteus” page.  For the past six months or so, many people would come to my site through google image search or when other sites would direct them to my site as if I was the creator of the image.  As such, it has become the most popular article on my site garnering about 21% of the entire views (out of the 50+ articles and the homepage).

I have become increasingly uncomfortable with this and now I finally did something about it.  In order to get this weight off my shoulders I had to find the person who made this image.

After doing some digging, I ran across a series of images that had a similar layout to the Dunkleosteus image such as the one seen below. 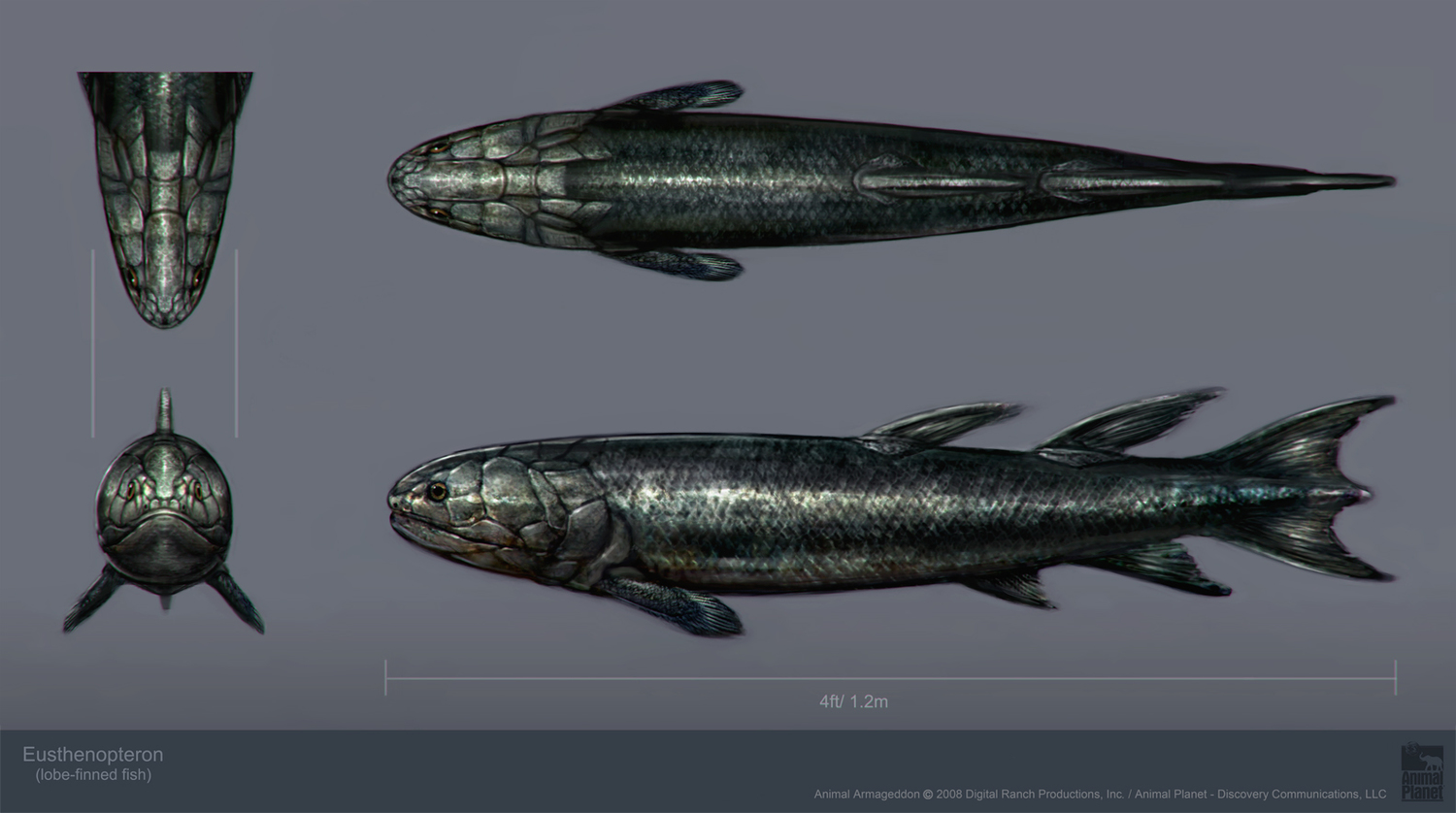 The image came from a program on the Animal Planet channel called Animal Armageddon.  A show about different kinds of extinct animals in Earth’s history.

At this point you may say the search is over but I was not convinced.  The Animal Armageddon website itself just shows videos of the animals and not the images I was searching for.  There had to be an artist that was behind them.

Image searching Animal Armageddon had given me the results I wanted.  Far from the top image hits I had found a blog that finally claimed ownership of these delightful prehistoric animals.

His name is Sebastian Meyer and his website can be seen here.  When I saw his website’s subtitle of “Concept Design / Creature Design / Visual Development” I knew that I had found the right guy.  He had worked on several different movies, such as Star Trek: Into Darkness, as well as several different projects, one of which was Animal Armageddon. 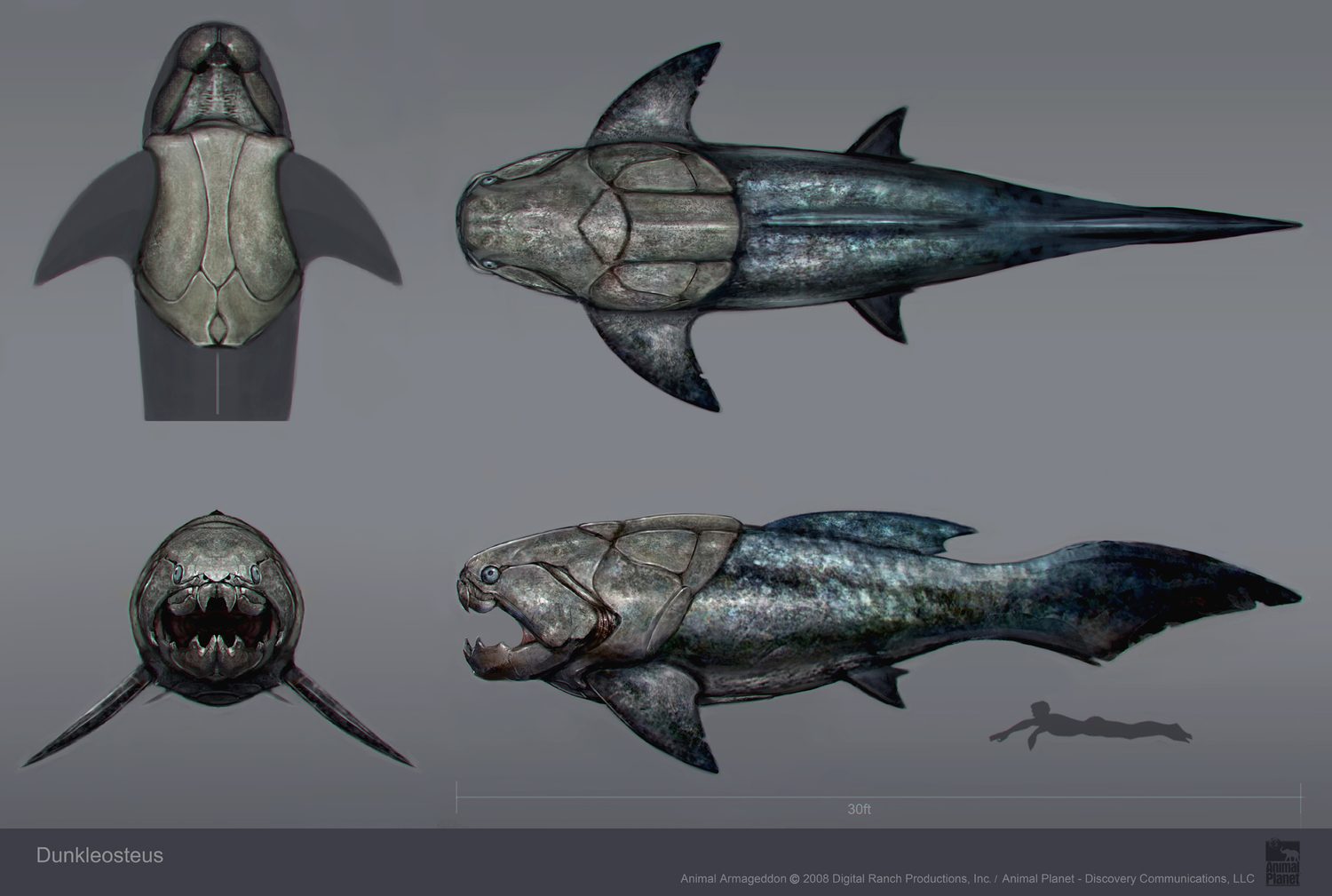 Unfortunately, Sebastian Meyer’s website looks dormant as it was last updated in February 2014.  But nonetheless, I want to make sure that people know he is the OG.  He’s the guy that made one of the best Dunkleosteus images ever.

I have already updated my first article using this image so that people in the future know who is the true artist.  Hopefully, his website will see traffic and garner interest in the internet community.  I may not get as many hits to my site now then I once did but I don’t care.  I want to be known for the material that I made just as I’m sure Sebastian Meyer would want to be known for the work that he has done.  It’s only fair to give credit is Dunkleosteus after all.