Revolt, Rebellion, Revolution.  These three “R”’s are the magic words that help define both the Creative Assembly-produced Total War video game series and the awful Great War which is currently “celebrating” its centennial anniversary.  I am both surprised and not that these two topics haven’t come together to produce an in-depth, strategy-filled game that takes place during the Great War-era.  This game has the potential to be amazing but it could very easily be bogged down with bloated mechanics and stretches of time where you do nothing but click the next turn button.

I first thought about this marriage while I was playing both Empire: Total War and Napoleon: Total War.  Compared to other Total War games, both of these games take place relatively late in human history representing late 1700s and early 1800s respectively.  The use of guns and canons is a far step forward compared to the arrows and swords Total War embraces in its Rome, Medieval, and Shogun settings.  But, they are done surprisingly efficient especially when combined with cavalry and fortresses.

The Great War is also extremely perfect when playing as certain factions.  You can play as Britain, Germany, France, Austria-Hungary, Russia, and maybe even Ottoman Empire and Italy.  All seven of these nations fought in huge conflicts that ranged throughout a greater part of Europe.  And it’s not like the Great War: Total War would restrict you to certain allies or enemies.  You could start the game in say, 1900 (or even 1870 if you want to include the Franco-Prussian War) and have all the participants naturally decide their allies on their own accord.  It would be very similar to the board game Diplomacy now that I think about it.

The United States (and other foreign powers) could also play an important role in the game even if the map focuses only on Europe.  All these countries can play as a neutral to a less-than-neutral position at the beginning of the game.  Do you choose to sink a neutral power’s supply ships in hopes of hurting your opponent?  That may backfire and the neutral power could declare war on you (and your opponent could get maybe 10 more, free, soldier units or something).  Perhaps you could win over a neutral power through diplomacy, gifts, and trade agreements.  The choice is yours to make.

Given this is the late Industrial Era; you can have many improvements for your home country such as the usual factories and farms but even infrastructures such as railroads, electricity, and telecommunication.  Man, you could transport your armies so fast if you built railroads in your homeland.

The three “R”’s would also play a huge role in this game, perhaps more so than other Total War games.  Worker riots and soldier mutinies run rampant during the Great War, then you got the occasional independence rebellions like the one the Irish started in 1916 and of course, you got some major Russian revolutions to cap it off.  Soldier morale could also be affected by say recent gas attacks, current weather, or battles where many soldiers died and nothing was gain from it.  Whole units of soldiers can lay down their arms or even fight you in response to the awful conditions!  Also, can you imagine sending terrorists or instigators to your rivals in hopes of stirring a revolution?  That would be awesome!  On the one hand, you would have to keep your people happy but on the other, you can cause chaos from the inside out!  The Austria-Hungary Empire could disintegrate before your very eyes as armies representing different nationalities spring up and take back cities belonging to the people!

And maybe get a certain Archduke assassinated to start off a major conflict…? Image from http://en.wikipedia.org/wiki/Archduke_Franz_Ferdinand_of_Austria

Although a Great War setting is not a far cry from Empire or Napoleon and can be done easily there are a few key differences that have to be addressed.

The first key difference, machine guns, and by extension trench warfare, were such an integral part of the Great War that it’s hard to find one without the other.   So many soldiers were killed on both sides by these weapons of war that it was probably one of the main reasons why stalemates happened all the damn time.  This is where a Great War: Total War game can be frustrating if not done right.  Your own soldiers can be killed en masse after several machine gun units mow them down.  Though historically accurate, it’s not very fun to play with (except when you’re the one shooting of course).

As such, you can do several things to nerf the power of machine guns.  For one thing, they are a better defensive than offensive weapon.  As such, soldiers carrying them would be quite slow and cumbersome.  The soldiers can also only fire them for so long before the gun either jams or overheats making them not very effective for long battles.  Technology upgrades can fix these overheating issues somewhat but you still wouldn’t be able to fire them for very long.

Gas grenades and shells would be easier to incorporate as they’re basically a stand in for the howitzers.  You could probably do some sort of penalty against soldiers with tear gas (like they’re slowed down, do not fire as well, or morale is lowered) but the awful chlorine gas is where things truly matter.  Not only would there be a lot of fatalities but it would be a good morale killer for even hardened veterans.  And of course, one of the first technology upgrades you can get for the soldiers is the ability to wear gas masks which would be represented as a button on the tool bar during the real-time battles.  The gas masks might lower accuracy and make your soldiers tire faster but at least they’re not being gassed at. 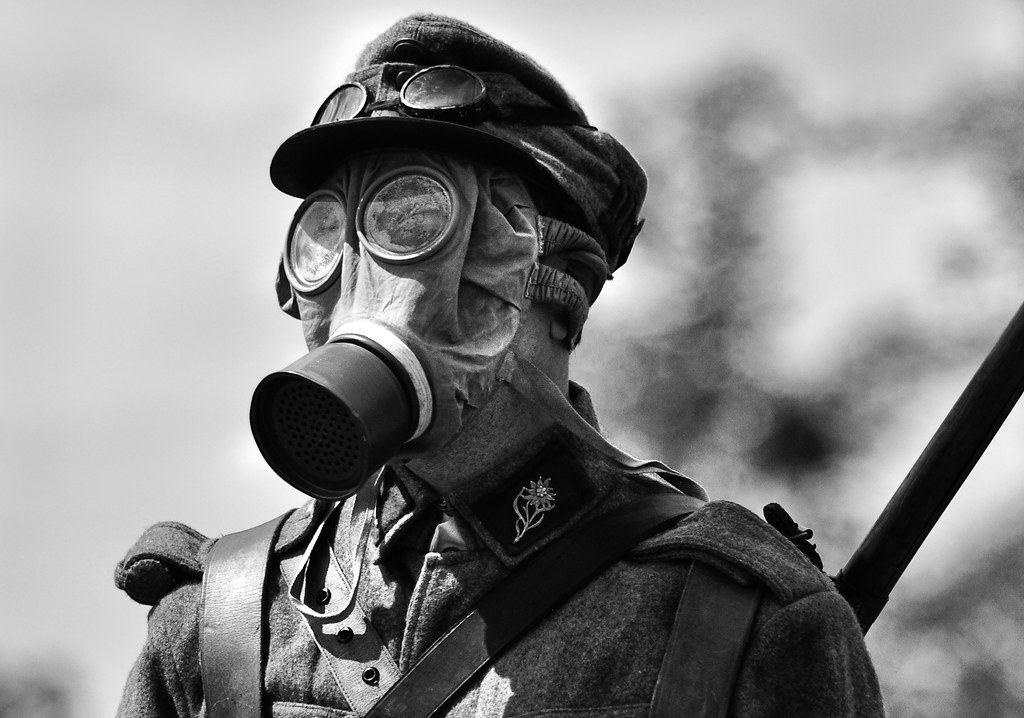 Tanks would be another technology upgrade you could easily incorporate into the game.  At the beginning of the game, you could have cavalry units for horses which although they might be useful very early on (especially if we’re starting the game 1870), they can soon be antiquated by the arrival of the machine gun.  Tanks wouldn’t make their appearance into very late in the technology tree but once they do, they can easily smash through defensive lines of barb wire and trenches.  Still though, they would be expensive to produce and they would be rather slow and have the chance to break down (again, trying to make sure they don’t become OP).

But the most difficult technology to incorporate would be airplanes.  Though it would be easy to use biplanes for reconnaissance or blimps to bomb distant cities, the real-time strategy would be much harder to handle if it’s used at all.  The real-time section of the games work on a (mostly) two dimensional terrain and adding aircraft to the mixture would make them impossible to control, much less use them for their full potential.  Perhaps you can send in a squadron to bomb a certain part of the map during the overworld phase.  Maybe a passive advantage is an added accuracy bonus for artillery allowing them to hit a group of soldiers on target.  Though both of these sound acceptable, they still don’t really use the planes to their fullest capabilities.  This will need to be played around with before aircraft are fully realized.

I really hope the Total War series makes a Great War game.  After thinking about it and writing all the potential it has, I really think it could work very well.  The lack of a prominent Great War game should be filled by a prominent series.  The Total War series is that game as its elements of nation building and alliance forging go perfect with the Great War along with its real time strategy on the battlefield.