I was pleasantly surprised by 2020 Oscar nominees for Best Animated Short.  In previous years, you see a deluge of American (and sometimes Canadian or British) shorts.  This year, not only do we see a surprising mixture of shorts from different countries but we’re seeing vastly different art styles telling intense story lines along a sliding scale of comedy and drama.  In previous years, it was rather easy for me to decide which was my favorite but this is the first time that I had to seriously consider among not two but three of the nominees!  They were that good.  Let’s go through each of the nominees and end with “Hair Love,” which is my pick for best animated short of 2020. 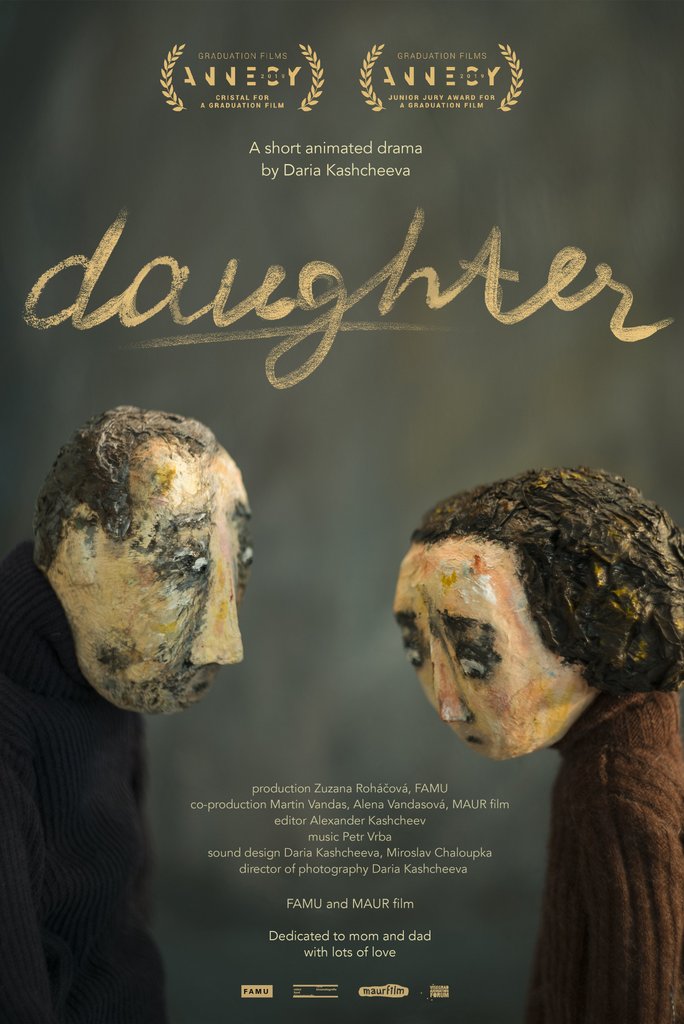 From Czech Republic, “Daughter” focuses on the story between a woman and her dying father and their strained relationship.  Right off the bat, we are tuned into the short’s art style which is probably the most distinct out of the five.  The stop motion combined with the jolting camera is one of the most surreal experiences I have ever seen and really makes you feel close and personal with the characters despite their obviously non-human like appearance (as a side note, this short’s art style reminded me of the 2007 Animated Short Winner, “Peter and the Wolf” which was produced in Russia).

I admit that I was slow to grasp the story’s message, handling death and our mortality, due to unusual shots and jittery editing.  It wasn’t until afterwards, when Mary and I were discussing it, that we landed on that mortality theme.  Part of the story involved the girl finding a dead bird, showing the bird to her dad (who didn’t know how to console her), running to her room, and then changing into said bird.  The daughter reminisced this as she was in a hospital room with her dying dad when a bird flew into the hospital’s window and died upon impact.

All of this coincided with the daughter’s internal struggle about whether or not her dad loved her.  The lack of fatherly affection eventually drove her away from him and the last she saw of him (before his death) was through a train window.  Thankfully, she receives an uplifting clue of his love as she found her bird mask underneath his pillow.  A sign that he remembers her fondly even after she left him. Family themes were very strong in this year’s shorts as demonstrated in this odd but thought provoking piece, “Sister,” produced by both American and Chinese collaborators.  This stop motion piece (involving very fuzzy set pieces), tells the story of a man talking about his younger sister during childhood.  Only it turns out, he doesn’t have a sister, due to China’s One Child Policy.  This reveal dramatically shifts the piece from nostalgic remembering to wishful thinking.  Where his parents instead of getting an abortion had raised a second child.

What stood out to me about this story was the very weird child imaginations of games and memories.  The enlarging of the sister-baby was humorous but I was uncomfortable of the belly button…noodle?…and the baby suddenly changing to a balloon.  I DID like the tooth tree though!  That was pretty great.  Although the reveal that his sister’s existence was fabricated, I do feel like we could’ve stayed on them longer and allow us time to care and grow with the two siblings and make the impact stronger.  Still, I love that critical message against the One Child Policy, it’s a subject that unfortunately doesn’t get talked about a lot. 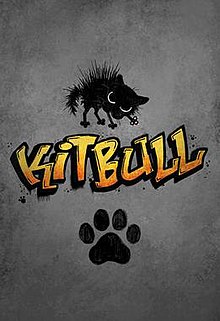 This year’s token Pixar short, “Kitbull,” is so delightfully different from Pixar’s usual style that I was really struggling whether or not to pick it for my overall winner.  It’s true, I think that Pixar gets a lot of credit for being a great animation but sometimes I’m like, let’s give someone else a shot!

Anyway!  “Kitbull” is so delightfully cute that it pains me.  The kitten is probably the best animated kitten I have ever seen and it really just carries this film.  I love the way that it freaks out, that it flips on the dime between playful and scared, and all its adorable kitten noises.  The pit bull, the second of our deuteragonists, is kind and playful but is scarred by emotional and physical abuse but acts as a soft foil to our feisty kitty.  I think this is one of the best representations of pit bulls in media and that’s awesome.  This short is further propelled by its soft art, it’s clean animation, and its easy-to-follow story despite the lack of a narrator. 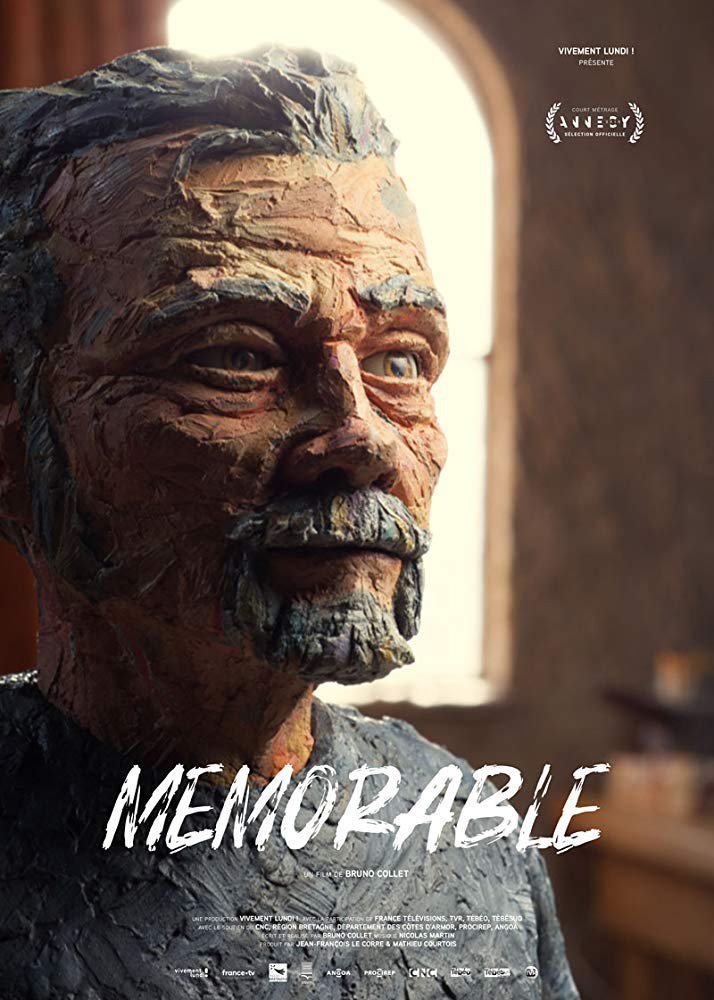 “Memorable” hails from France and is actually not the first time we’ve seen an Animated Short from France about memory loss (2016’s “The Head Vanishes,” was submitted but not nominated) but this short was so wonderful that I broke down crying by the end of the credits.  The art style and story are very in-tuned with each other, its impressionistic style reflects upon the main character’s artistic talent.  And as the artist’s mind is slowly fading away leaving him a shadow of his former self, the art style degrades making the world more and more abstract and empty (I love that he himself is becoming rougher and rougher around the edges to demonstrate his memory loss).

Despite the very heavy theme this story carries, it manages to find room for levity whether it’s the funky, Tim Burton-esque characters or, more importantly, the husband’s sense of humor which gives this character depth.  You can honestly imagine what this man was like before he lost his memory and why his wife fell in love with him in the first place.  This comes to a dramatic ending of sadness and humor as he dances with his wife and her colors slowly float away leaving a blank canvas that is now his mind.

“Hair Love,” produced in America, is my pick for Best Animated Short and I’m pleasantly surprised it won it despite the heavy competition.  Honestly, everything about it was just so tight and focused.  The animation style was appealing, I fell in love with the characters (and I want to hang out with the dad), and the pacing was really wonderful.  But overall that story was just really good.

I just love how everything flowed together and we didn’t need any narration to help us along the way.  The young girl wakes up to and excitedly checks her calendar to realize it’s a big day, today.  What that day is we don’t know until the end of the short when we realize her mom is being released from the hospital.  That’s a great pay off.  But what’s even better is that twist that her mom was the same woman who guided her on the internet hair style videos.  Yes!  So good!

And this I think makes the short that much better on a second watch!  The dad’s struggles aren’t just to appeal his daughter but to connect with her and, by second-hand, his wife.  I love that animation bit where he’s struggling to control her hair and it turns into a full on boxing match!  So great.  It’s nice that out of the heavy themes and rather depressing stories we were given this year, the one that won was uplifting, optimistic, full of heart and “Hair Love.”  Well done!

A side note about nominee reactions

Hey ShortsTV, I have a favor to ask.  It’s fine to show the creators reacting to their nominations but can we NOT show it during the end credits?  It can really detract from the watching experience, especially after watching something heavy like “Sister” or “Memorable.”  Thanks!