-For once, relevant wars are fought on all six continents creating another exciting part in the latest CBR. Some notable highlights include the Blackfoot most impressive city capture of the game (Olongapo from Champa) and Finland sending paratroopers to Arabia (a civ that it doesn’t even share a land border with).

-The Great Pacific War continues as Vietnam resurges forward and annexes many coastal and island cities. Kimberly defenses begin to weaken but have still held up strong against Australia’s onslaught.

-In what is dubbed by the latest Power Rankings as the “War of South American Relevance” Chile and the Buccaneers declare war on Brazil and Inca creating one of the most exciting wars that South America has produced since the beginning of the game. Brazil invades Chile while the Buccaneers shell the Incan coastline.

-The Inuit’s advances stall under heavy Canada and Texas defense but continue to bring advance units to the frontline. By the end of Part 40, Texan defenses broke down and the White Walkers are advancing southward with gusto.

-Sparta has found its foothold again and is fighting back against Sweden in the Second Sweden-Sparta War.

-Mughals adopt Freedom in a world where only tyranny exists. Good for you Mughals!

-Argentina is eliminated by Brazil making it the 18th civ to be eliminated from the game.

This was a bad part for: Argentina, Inca, Ayyubids, Champa

Truth be told, I’m kind of surprised that Argentina got eliminated due to its last city nestled in the mountains but Brazil’s determination did not let that faze them. Argentina’s neighbor, the Incans, is now the new South American punching bag as the Buccaneers ravage their coastline cities.  Finally, Ayyubids continue to circle the drain as, despite regaining Cairo a couple of times, they ultimately lost their capital, along with Aswan, to their hated Carthagian rivals. Ayyubids’ fate may soon be like the extinct Argentina, or worse, irrelevant like Japan. Over in the Pacific, the Champa have been kicked off the mainland by Vietnam and now reside on island cities. I think Champa may retake Kauthara but I feel like Vietnam has a good grip on the situation and have shut out Champa from the rest of Asia. If the weakened Champa isn’t too careful, Burma might surprise us all and DOW. That would be neat.

This was a good part for: Sparta 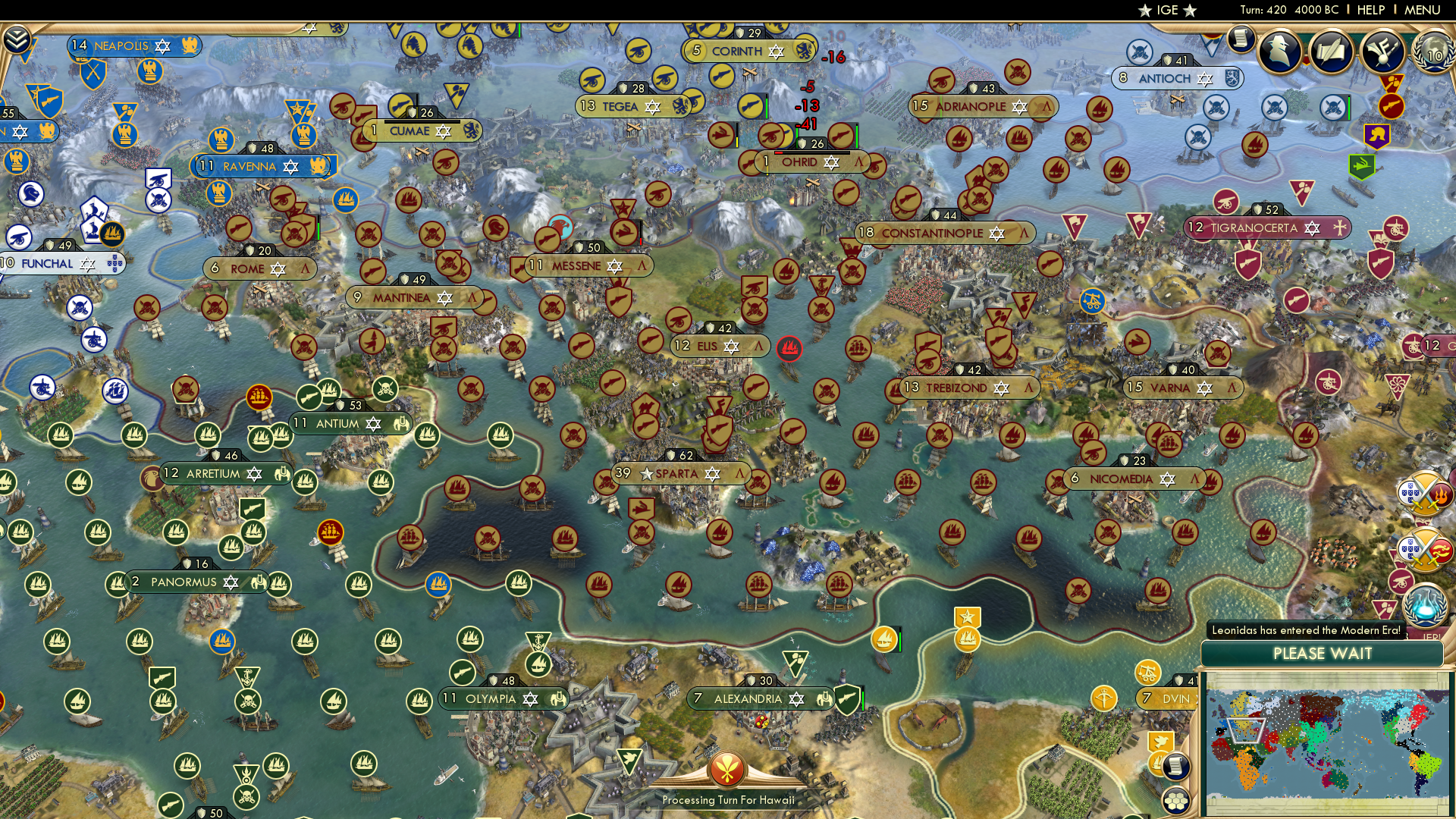 Image from https://imgur.com/a/dMYpt/layout/horizontal/#46 of Part 40

Sparta managed to reverse the Sweden conquest and is now pushing back north. They have reclaimed Cumae and Ohrid and now have the units to go on the offense. Their next target would probably be Tegea but Sweden cannons and troops protect the city. Expect much blood to be shed by these two civs in the next part.

This was a bad part for: Texas, Sweden

Although Texas didn’t lose any cities by the end of Part 40, the situation certainly looks grim for them. Near the end of the part, we see Inuit forces bursting through the borders, causing wreckage and mass chaos throughout the territories. What’s more, Texas’ Sisseton is at zero health, and Corpus Christi is in yellow. Further tightening the noose is the big tech difference as Inuit has modern infantry, helicopters, bazookas, and airplanes, against Texas’ cannons and great war infantry. Canada and Inuit may stalemate hard, but Texas is about to fold.

Sweden had perhaps reached its peak at the end of Part 39 as now it is facing a resurgent Sparta. Although Sweden may be able to hold onto its other conquered cities, what’s most troubling is the lack of troops that defend its core cities in the north. As the narrator points out, Sweden’s paucity of soldiers looks quite delicious to Finland…

This was a good part for: Vietnam, Carthage, Buccaneers, Boers

Perhaps the biggest winner this part was Vietnam. Vietnam was definitely not looking good in the last part but all that has changed. Their horde of submarines has fought off Australia’s armada, and now, their troops and ships are capturing or recapturing many coast line cities. Granted, these cities could flip in the next part but nonetheless, Vietnam is looking better off and should continue to push forward and try to take other island cities that host Australian aircraft. Not only will this expand their homeland, but it will also provide relief to their core cities from Australian bombers. 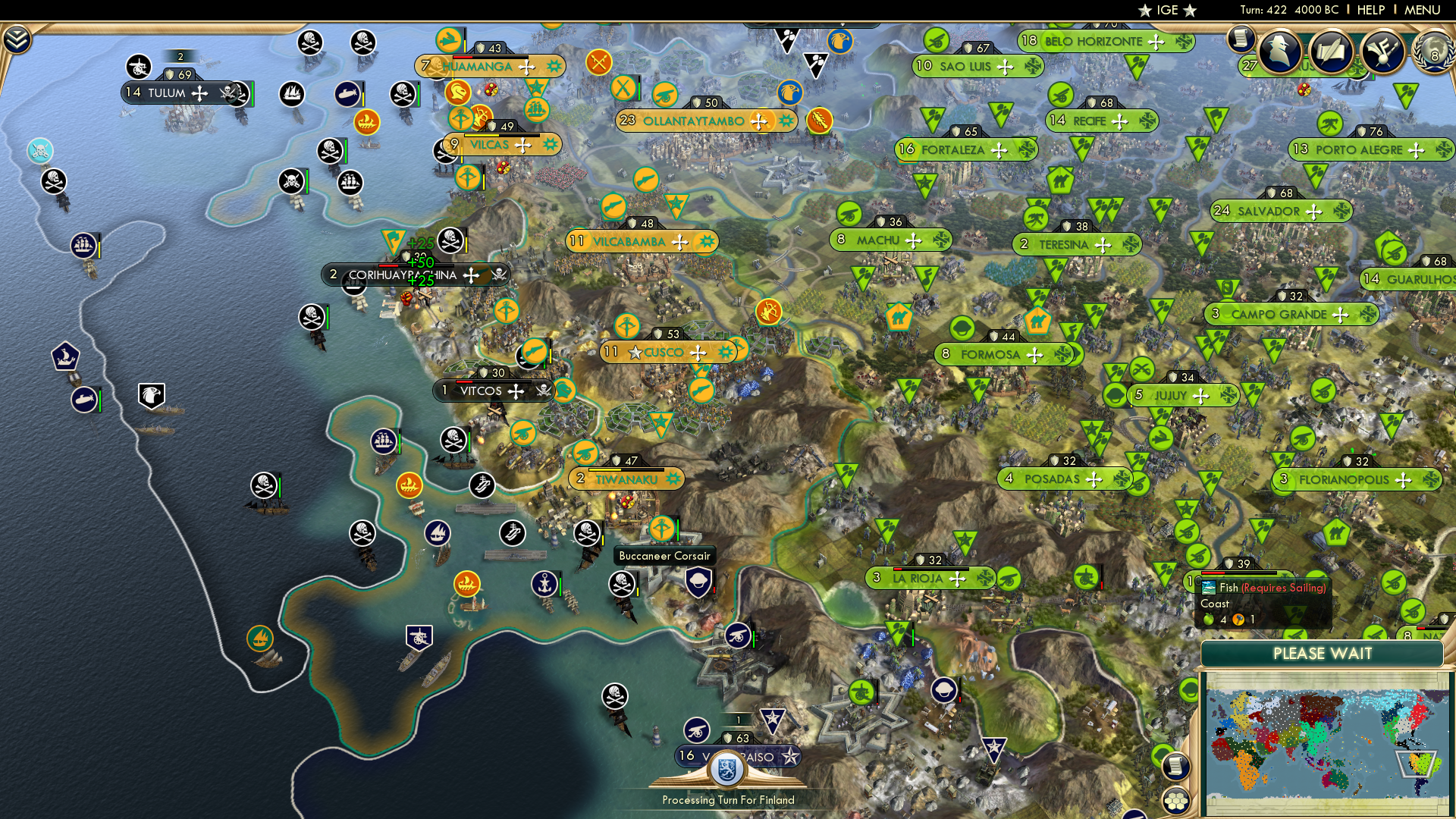 Meanwhile, the Buccaneers, fresh off their Portugal war, declare war on Brazil and the Inca and become allies with Chile which sandwiches their rivals neatly. Although Buccaneers are extremely light in their land defense in northern South America, at least Brazil is heavily distracted by Chile which was well played by the pirates. What’s more, their intense armada is shelving Incan cities and have even sniped them from Chile! If I was playing Chile I would be embarrassed right now. The Buccaneers need to be careful though as the Brazilian core cities could start producing armies that will stop their total conquests. Watch the entanglement between Brazil and Buccaneers to see how it all plays out in Part 41.

Carthage has done well thanks to their persistent conquest of Ayyubid territory. Not only do they have Cairo firmly in their control, they also occupy Aswan and still have a (relatively) strong army to boot that is now marching towards Baalbek. Carthage’s conquest may be impressive if it wasn’t for the fact that they occupy a border with the Boers. Ouch.

Speaking of which, the Boers continue to surprise us as they skip tanks and go straight to modern armor. Of course there is also the fact that they have AN ATOMIC BOMB at their disposal, so, you know, no biggie. Their development also highlights the new timeline TPang has introduced into the gameplay. I myself have yet to play with the new timeline so I am unsure how all of this will turn out but nevertheless, I am now more than ever convinced that Boers will be the winner of the CBR. At this point, only a few civs have even a chance of stopping them. We’ll just have to wait and find out.

If Mexico declares war on Texas… 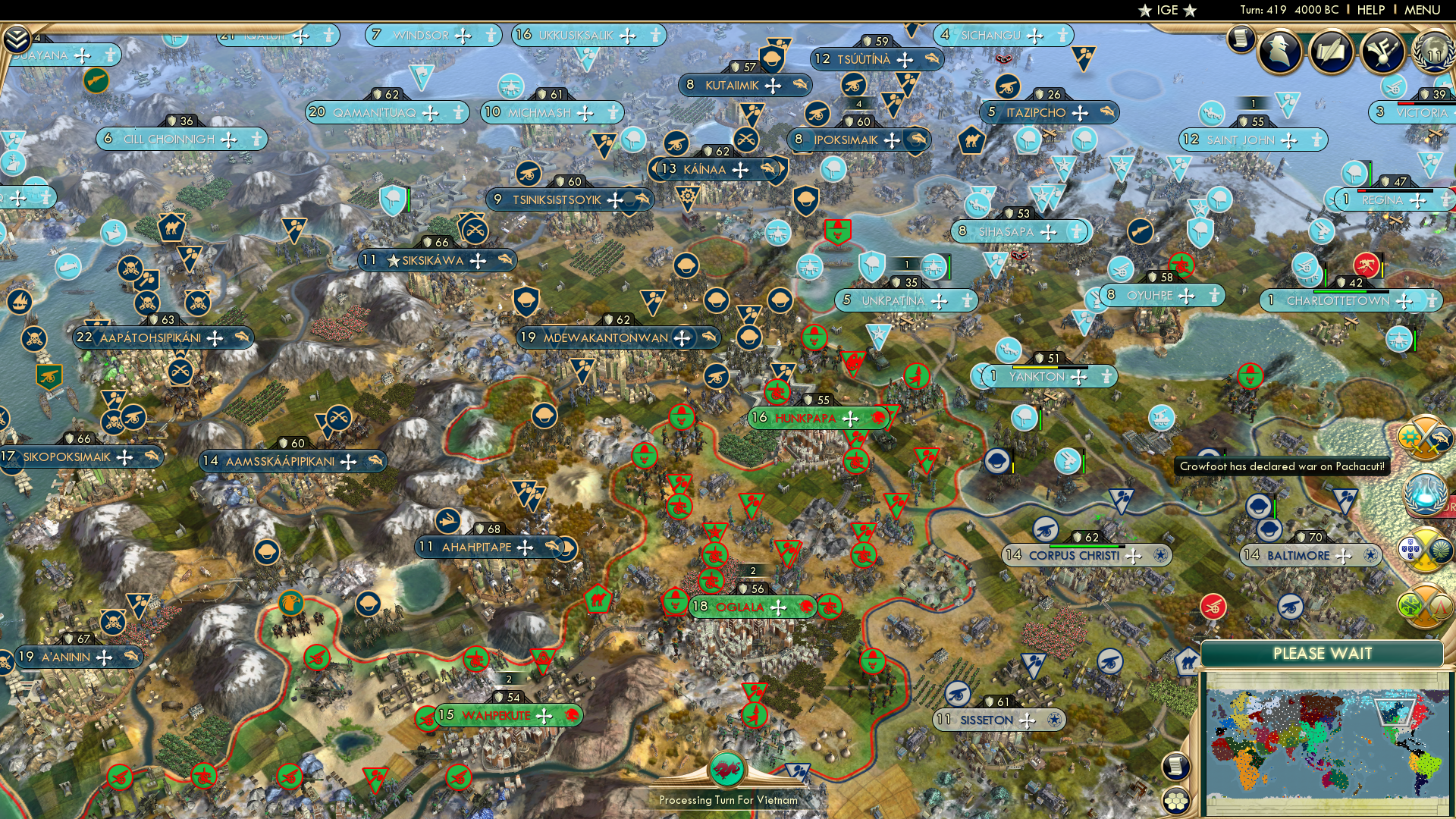 Slide from https://imgur.com/a/dMYpt/layout/horizontal/#40 of Part 40

Although we haven’t seen Mexico much during this last part, what little we have seen has shown us a respectable army that is nothing to sneeze at. Both Blackfoot and the Mexicans have taken a very neutral position for the Inuit vs. Canada+Texas War, but it is Mexico that could have the bigger effect here. Blackfoot’s army is a joke next to the Inuit so Blackfoot would only make a small dent to the Inuit. However, if Mexico were to intervene on the side of the Inuit, it would spell disaster for Texas (and to an extent, Canada). Mexico has proven in the past that it could take Austin so no one would doubt Mexico’s competence. What’s more, Texas is weakened but still respectable; if Mexico were to intervene then Texas could falter majorly. This would only benefit the Inuit who could swing around and add another front to Canada.