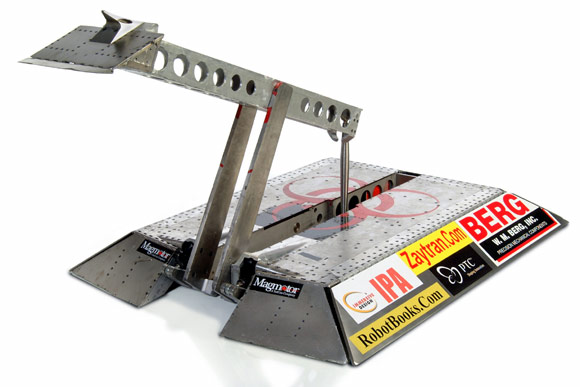 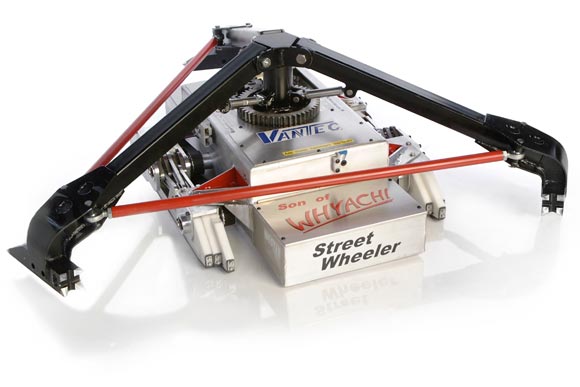 I was exposed to Battlebots when I was 10 or 11 years old, the best age possible.  Despite it being shown during early Saturday mornings, I tried to watch it as many times as I possibly could and even set up the VCR to record it at the proper times.  Battlebots was a short but huge fad.  They had board games, toys, McDonald Happy Meal toys, and even an extensive guide to Battlebots.  I remember owning all of these things.  The toys were especially fun as they used the spin bots, like Ziggo, as super fast battling tops similar to Beyblade.  I had a lot of fun with those.  My dad even gave me for Christmas one year a remote controlled Dissector and Biohazard which could battle each other.  They were decent size as well, both going over a foot long by almost a foot wide.

Now, going back to all of that a decade later, has it held up well?

Where do I begin with this?

Okay, my biggest complaints have to be the cohosts who were Bil Dwyer and Sean Salisbury (who was later replaced by Tim Green).  For being on the Comedy Central channel, these guys were just not funny; they were more annoying than funny in fact.  I can get over their intros to the battles and such, but do they have to comment all the damn time during the battles?  Shut up, I just want to watch the robots kicking each other’s asses!  Unlike football or basketball where the announcer is useful for the spectator, the cohosts just state the obvious and really have no part in it other than to liven up the action.

The show also suffers from lack of battles, each 30 min long episode has only three battles per episode which can only last 3 minutes at max.  The rest of the time is spent hyping of the robots or interviewing the builders or just killing time.  I wish we got to see more of the fights and be able to appreciate the tournament similar to the NCAA Tournament.  Just imagine watching all those fights and being able to truly appreciate the winners as they fight a long and hard battle to the Silver Nut.

But as I was rewatching episode clips (full length episodes are hard to find), I slowly realized why they had the annoying hosts and all of the filler time between the battles.  Most of the robots aren’t very exciting.  They’re mainly push bots and wedge bots.  And there are two very simple and easy reasons why this is so.  They’re cheap to build and they’re more likely to win.  You can’t argue with that.  Some of the more outlandish battlebots like Nightmare may be cool and all, but he can’t stand a chance if you get to him from the side and push him over.  As such, many of the battles are simply robots pushing and shoving each other into the hazards hoping the other one will break down.  It’s kind of boring…

Okay, I may have been a little harsh there.  There are some great examples of battlebots who have won it all that were neither push nor wedge bots.  Son of Whyachi, Hazard, Ziggo, Backlash, Toro; these bots and more are excellently designed and pull off their weapon of choice very well.  However, most of them were quite expensive meaning the average person probably wouldn’t be able to afford such a strong robot.

But even so I can also see why Comedy Central decided to not show all of the battles, especially the early round battles.  Faulty or plain-looking robots cannot generate the excitement (aka the views) needed compared to the more interesting ones.

There’s nothing much else to say about the show except for the weird guest appearances with Bill Nye and Carmen Electra.  At the time, I thought it was awesome that Bill was on the show, now, I just feel sorry for him, why did Battlebots need him??  At least he was better than Carmen.  God, even as a kid I couldn’t stand her.  She contributed nothing to the show.

Still, I think it would be cool if Battlebots came back in full force nowadays.  The advances in technology means we can have better robots that won’t break down as easily and can be more varied in design.  With so many new and young people going into engineering nowadays, the potential for the next Hazard or Ziggo can be easily achieved.  I can also imagine the show on HBO but without all of the annoying hosts and with all of the battles viewable.  If they clean it up, it can be great.

Before I hand out my Nostalgia Filter Test Score, allow me to nerd out.  *ahem*

-Wasn’t it awesome when Nightmare destroyed Slam Job in one hit?!?  He went flying!

-Isn’t Hazard amazing??  He can destroy any opponent that faces him; Middleweight bots just shudder in fear thinking about him!

-And when then rookie-bot Son of Whyachi in Season 3 mauled all of his opponents to pieces including Nightmare and Biohazard??  Look me dead in the eye and tell me you don’t think that season was awesome!

-And when Ziggo showed that lightweight robots weren’t wimps by annihilating any robot that gets in his way??  Man, I love that robot!