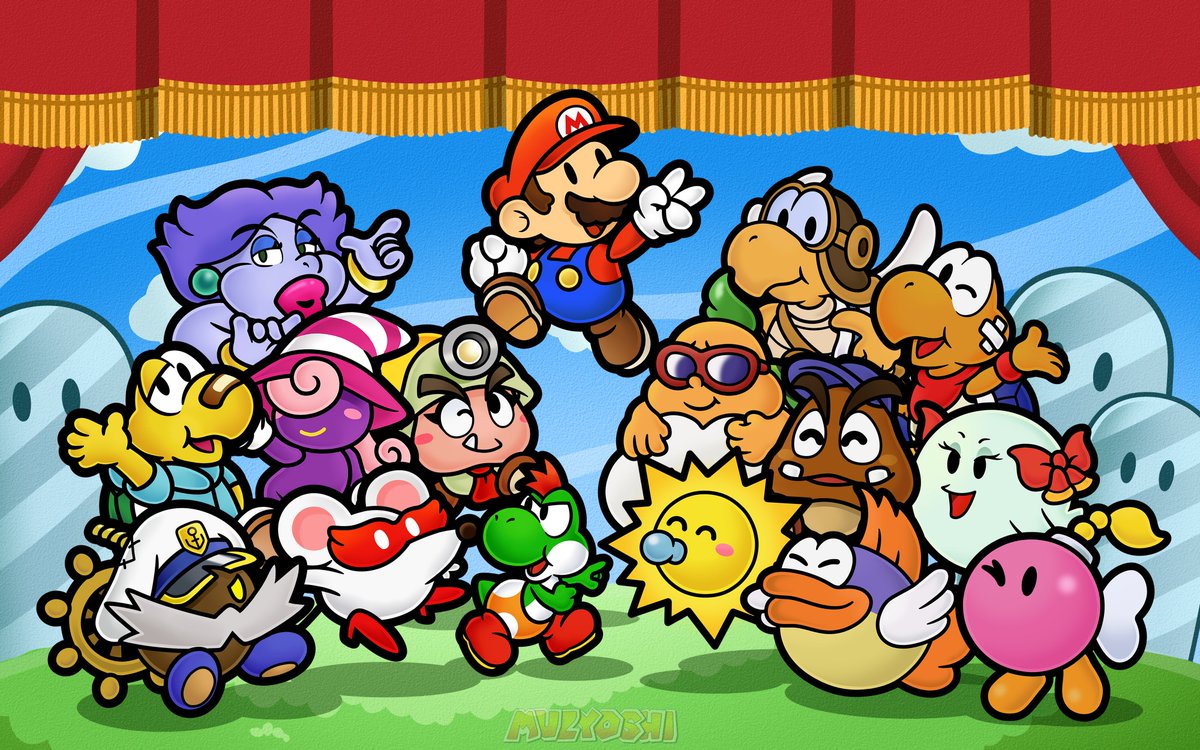 So last night, I started replaying the stellar Super Mario Odyssey and while I was playing it I couldn’t help but admire all the citizens and characters from the very different kingdoms. It got me thinking how these citizens would serve as great partners in a classic Paper Mario game (Paper Mario 64 and Thousand Year Door).  And with the rumors that there might be a new, classic-based, Paper Mario game coming out (yay!) I thought to myself…well…who would Mario’s new partners be?

It’s been 16 years since Thousand Year Door was released and since then we’ve seen a slew of remarkable games like Mario Galaxy, Super Mario 3D World, and of course, Mario Odyssey.  In these games we see bad guys and allies of all sides come and face or aid Mario’s quest.  They include Lumas, Moe-Eyes, Jaxis, as well as characters like Nabbit too.  These new characters, along with classics like Shy Guys or Hammer Bros., can be very useful for Paper Mario’s journey.  But who to choose? Before we answer that let’s look at the first two Paper Mario games to gleam some ideas.

A good Paper Mario team needs to have diversity to help Mario progress in the game. This can be anything from blowing up walls with Bob-ombs, riding a Yoshi or Parakarry over gaps, or swimming with Sushi between docks. The team should also be good at traversing through hazards like Lakilester’s cloud or Lady Bow’s and Vivian’s intangibility. Finally, there should be a partner who can add insight to the world like our Goombas or find items like Watt or Ms. Mowz.

They should also be good with combat. The huge diversity of enemies means you need a lot of tricks to knock them out. This includes the Koopas’ Power Shell to knock through ground enemies, Watt’s or Yoshi’s defense-ignoring attacks, or Sushi’s advantage over fire enemies. What if the combat is too tough? Not to worry! Lady Bow’s Spook and Flurrie’s Gale Force can get them out of here! Mario’s stats looking bad? Give him a boost with Sushi’s Water Block or Koops’ Shell Shield! Don’t know your enemies’ stats and weaknesses? The Goombas can tattle on them! You guys get the idea.

With this in mind, I wrote up a complete team of new partners who’d be wonderful to have along with some honorable mentions.  Let’s take a look who Mario’s new partners could be! 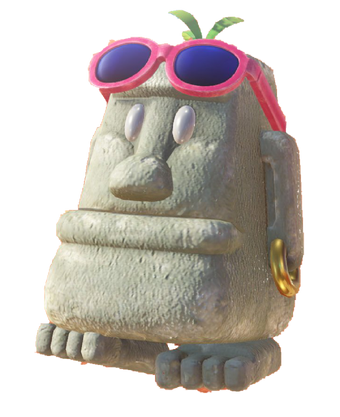 One of the more charming new citizens in Mario Odyssey are the Moe-Eyes; Moai statue-like people who roam Sand Kingdom.  When Mario captures one, he can lower his shades and see hidden platforms or objects similar to the Lens of Truth from the Legend of Zelda.  Although his Moe-Eye form cannot attack or jump, it’s very helpful to figure out how to get to, seemingly-impossible to reach, places.

Mario’s Moe-Eye Partner, we’ll call him Moe, can fill a combination of Goombella and Watt’s roles.  Not only can he give us background information on people, objects, and locations, but he can don his sunglasses to look for hidden objects.  Given that you may have Moe right at the beginning of the game, it might work better to give his ability to see hidden objects sometime later that way players aren’t constantly looking for invisible things.  Maybe Moe get’s a new pair of sunglasses later?

Battle-mode Moe is basically Goombario 3.0.  He has a “Headbonk” ability and he has his own version of tattle which would be called “Search.”  Standard stuff for a first party member.  However, we want to make Moe continually useful and not fall to the wayside like Goombario.  I think we can make Moe useful by giving him an attack called “Pinpoint” where he finds weaknesses in a foe’s defense and make them susceptible to attacks.  His final attack, “Headbonk Hop,” would allow Moe to jump from foe to foe until the attack’s timer runs out.

Another partner from Mario Odyssey but this time it’s the antagonistic Uproot.  When you possess Uproots you’re able to reach extremely high platforms and minihop onto them.  Not only was that helpful for exploration but Mario also used an Uproot to defeat the spaceship boss Torkdrift by attacking it from below.

Prune, our Uproot partner, will again fill a similar niche role.  She can carry Mario to extremely high places where they can hop off to nearby platforms (she could even get a power-up and reach even higher places as well!).

We also have some interesting implications for Prune on the battlefield.  She can hit the flying opponents but how about hitting them from below???  She can walk underneath them and just rise up and hit their soft belly (“Root Uppercut”)!  That would be fun.  And she could also do a simple “Vine Whip” attack to hit any ground-based enemies.  Through “Absorb,” Prune sucks the enemy’s HP and regains hers, and “Timber!” would be her growing extremely tall and falling on all her enemies doing bonus damage to flying foes.

This time we’re pulling from the classics and using a Boomerang Bro who made their debut in the iconic Mario Bros. 3 game.  Since then, these boomerang-chucking foes have been a semi-regular staple in the games and they can be tricky foes to defeat.  Mario himself face Boomerang Bros a few times in the classic Paper Mario games and we can base his BB partner off of those guys.

Boomer, our Boomerang Bro, would fill a very similar role to the Koopa partners in that he can hit distant switches and grab items but this time with his boomerang.  Yeah, that’s pretty much it!  He will be a very useful partner grabbing the likes of items, badges, and star pieces.

Boomer’s attack, “Boomerang,” would be a cross between Goombella’s multibonk and Bow’s fan.  He’ll throw the weapon out, hit the enemy, and the boomerang will come back and hit the enemy a second time, stealing any items along the way.  His final attack, “Juggling” would be this but could hit all the ground dwelling enemies AND ignore their defense.  “Sky Shot” would be similar to “Boomerang” but would hit just Sky dwelling enemies and “Shell Up” would give Mario a boost in defense.

Admittedly, Mary came up with this idea but I loved it so much I had to use it.  Mario’s next partner would be a duo; a sweet Shy Guy, named Shia and her pet Chain Chomp, Chompy.  Their role in the overworld would be similar to Mario’s previous Bob-omb partners but instead of blowing up walls they smash right through them!  Shia will direct Chompy to crash through any walls and her faithful companion will bust them up!  These down busted walls can lead to rooms and hallways and open up new areas of the map.

In battle, Chompy will be doing the heavy lifting.  His “Chomp” attack would pierce an enemy’s defense and hit any foe (although he’ll take damage if he bites a spiked enemy).  “Intimidate” would scare away foes similar to Bow’s “Spook” whereas “Glare” could lower an enemy’s defense down by frightening them.  For “Let Loose,” Shia lets go of Chompy’s chain allowing him to do massive amount of damage albeit to a random foe. 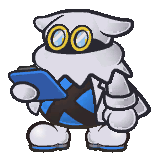 X-Nauts were the main antagonists for Thousand Year Door and although their occurrences after the game have been very minimal, I think it would honestly be cool to bring them back.  Maybe after Sir Grodus’ (leader of the X-Nauts) failed to take over the world, the rest of the X-Nauts disbanded and positively integrated into society.  X-Nauts themselves are general mooks although there are higher-level X-Nauts, called X-Naut PhDs, who use chemicals to hurt Mario or buff their allies.

Mario’s partner, Dr. Xander, can serve as Mario’s support both on and off of the battle.  His overworld ability would be intangibility akin to Bow and Vivian’s ability.  After years of tireless work,Dr. Xander finally and successfully invented a device that will make you intangible.  Sure it only lasts for a few seconds or so but it works!  So when Mario’s walking into a dangeorus situation, he can push a button and swoosh! he and Mario are safe from rolling boulders or sudden spikes.

Dr. Xander can use “Intangible” in battle to protect Mario from charged up attacks that would otherwise do massive damage to him.  Unfortunately, the device’s cool down rate will make Dr. Xander inaccessible the following turn meaning it will just be Mario for awhile.  Thankfully, Dr. Xander’s other attacks that will make him quite useful.  Through “Bomb Lob,” Dr. Xander throws an unstable potion to an enemy causing explosive damage with a high probability of burning them.  In “Minimize,” he throws concoctions that will shrink and diminish an enemy’s attack power (and the better the player is in the quick time event, the more enemies will be shrunk by the attack).  Finally, in “Explosion,” he mixes together volatile chemicals to create a super explosion that will do massive damage to all opponents!

Our last partner is a bit high concept and would be hard to program but would nonetheless be the most entertaining!  One Mario mook that’s only seen in the Paper Mario games are the Duplighosts; fiends who can almost perfectly copy a person or species right down to their weaknesses.  Doopliss, a chapter antagonist in Thousand Year Door, is a Duplighost who managed to steal Mario’s identity without fooling his partners!  In a game with notable scenes and chapters, this one really stood out to a lot of people and definitely change up the game’s formula.

Our Duplighost, Mimi, will use her Disguise ability to infiltrate fortresses and bypass guards who may otherwise kick Mario and his crew out.  I imagine it would be very similar to the umbrella mechanic that Peach briefly used in the original Paper Mario game.  Mario will direct Mimi to a nearby enemy who will change into and perfectly match them (except for the voice which might be hilarious writing).  While transformed, Mimi can lead Mario, through a guise that he’s a hostage or she’s a chauffeur, through the area.  This will cut down on the stress level A LOT as you can walk through an area without anyone attacking you which would be sooooo niiiiice.  When done, Mimi will transform back and change into another foe!  But if Mimi changes back too soon, the enemy will be startled and immediately attack!  So you want to be careful where you change.

Mimi is going to be a high-strategy partner like Dr. Xavier in the battle.  She has a simple “Headbutt” attack but after that it’s going to get crazy.  “Duplicate” will transform Mimi into an opposing foe.  Why would you want to do this?  I imagine you could have enemies whose only weakness are themselves akin to when Baby Yoshi would swallow and spit opponents in Thousand Year Door.  You could do this for literally any enemy of the game so you would have similar attack power regardless of the enemy.  This is by far her most complicated attack so thankfully her boosted attacks are less mind-boggling.  “Fooled You!” will confuse the enemies so much they become dizzy and “Mario Mimicry” will temporarily transform Mimi into Mario allowing her to perform any actions Mario could do too. 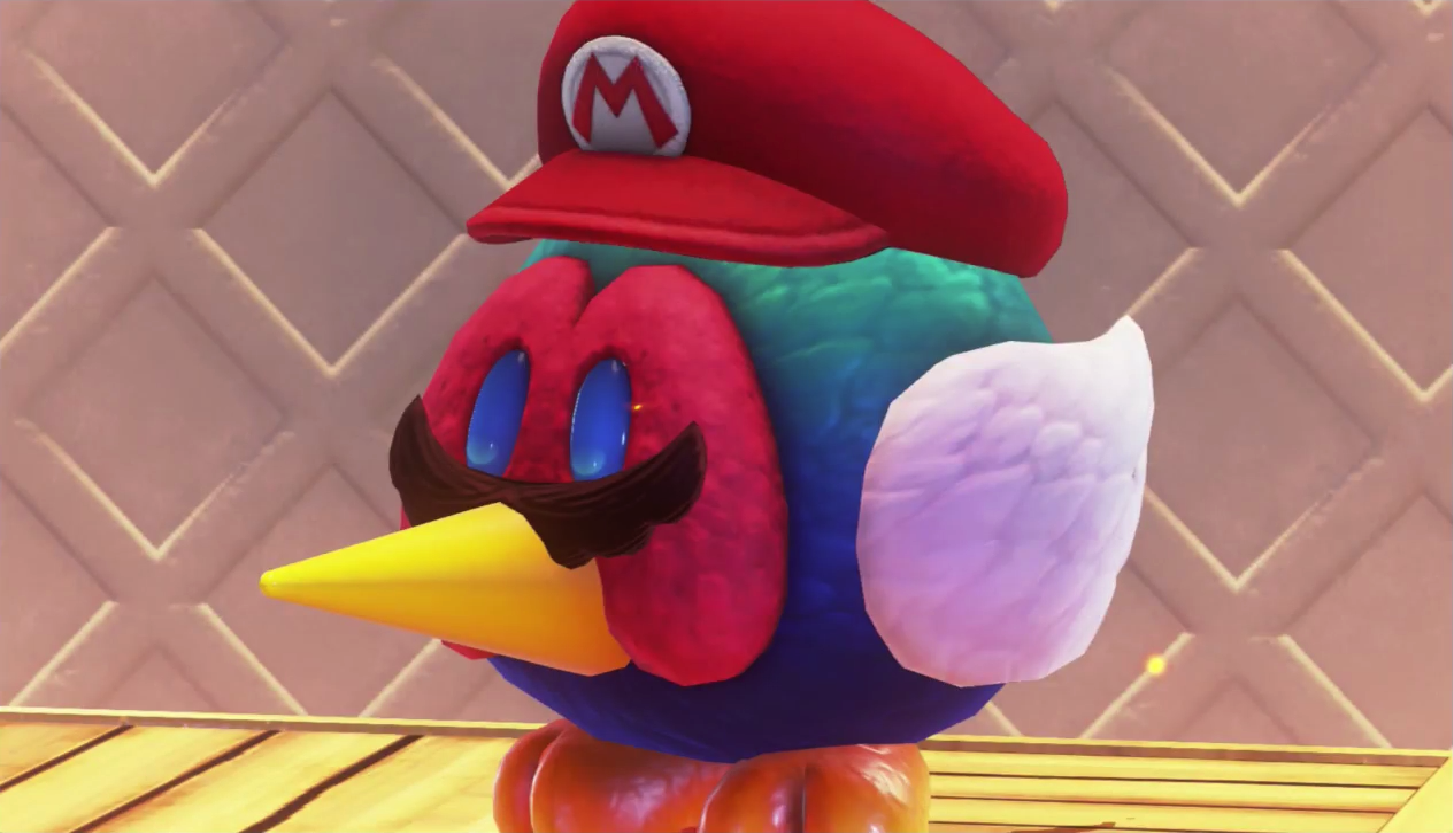 There were a few other partner ideas that I had that didn’t make the cut.  Some partners I like the idea of but couldn’t figure out how they would be useful!  So I can leave that in your hands if you want.

What about you reader?  What partners would you love to see in the next Paper Mario game?  What abilities would they have?  Let me know in the comments below and thanks as usual for reading!