Plot twists represent a very important aspect in J. K. Rowling’s Harry Potter series. Every book has an impacting twist that changes our outlook on certain characters, events, or settings. These twists make reading the Harry Potter series even more exciting to read a second (and third and fourth…) time through as we now see the clues and hints that point us to the bigger picture and it’s amazing. And today, I’ll be counting down the Harry Potter series’ best twists! These twists are ranked by their impact in the book and series’ storyline, their tentative balance between storyline clues and shock value, and the about-face perception they have on our viewpoints. Let’s dig in.

Book 3 exposed a lot of twists, turns, and reveals in the iconic Shrieking Shack scene; so imagine our surprise when we get one last twist that comes straight out of science fiction land. Hermione’s Time Turner is one of the most talked about things in Book 3 and that’s because it was done SO WELL. Hermione’s strange behavior and even stranger skill in attending so many classes was revealed because of time travel. I love this twist so much as time travel was never talked about at all until this moment yet we aren’t cheated by the notion that wizards can time travel. It seems very natural in the Harry Potter universe. What’s more, the reveal leads to one of the most brain boggling scenes in the franchise with two Harrys and Hermiones at the same time. Many discussions of paradoxes and predestination were born from this reveal alone. Finally, Hermione’s Time Turner saved two lives and got us wondering what else there is in the Harry Potter world that we don’t know about yet.

#5 Tom Marvolo Riddle is Lord Voldemort from Chamber of Secrets

It’s hard to remember that at one point in time this twist was profound. Voldemort is barely mentioned at all in this book and BAM, he’s the main antagonist. In the back of all of our heads, we knew Voldemort would eventually return but we didn’t expect him to do so quickly and in the form of a diary as well. It’s certainly quite chilling when Riddle wrote his name in the air and with a simple flick revealed “I Am Lord Voldemort.”  AGH!  IT WAS RIGHT THERE!

This twist certainly gave us an early insight into Tom’s pre-Voldemort’s life and showed us what kind of man he was even at a young age (something that we saw more of in Book 6). But here, we learn that he was a charmer, a manipulator, and a scheming wizard already bent on building his own legacy. The reveal also works quite well as we are led to believe, but with little overemphasis, that Tom is a stand up guy who unfortunately accused the wrong person. Unlike other twists on this list, this twist’s reveal stuck around until the very end of the series, it’s that important.

#4 Mad-Eye Moody is Barty Crouch Jr. in Goblet of Fire

So the “Goblet of Fire” movie made it painfully obvious that something was up with Mad Eye Moody. Hey, he’s licking his lips creepily and is drinking from his flask constantly! What’s up with that? The book downplayed this quite a bit as Barty’s impression of Moody was almost spot on, even fooling the likes of Dumbledore.

This twist is just so mind blowing that I can’t help but admire it. Every weird little detail, like the missing Polyjuice Potion ingredients or Barty Crouch’s name on the Marauder’s Map, is so obvious that we slap ourselves on the forehead for missing it. And it’s not like the Time Turner twist where we didn’t know time travel existed, we have straight up seen the Polyjuice Potion used before in an important scene just two books ago. This twist further piles up as Hammer Space was introduced earlier during the Quidditch Cup so we know that large rooms could be contained in smaller enclosures. This plot twist is so good that you really can’t help but wonder why the characters don’t talk about it more in the proceeding books. 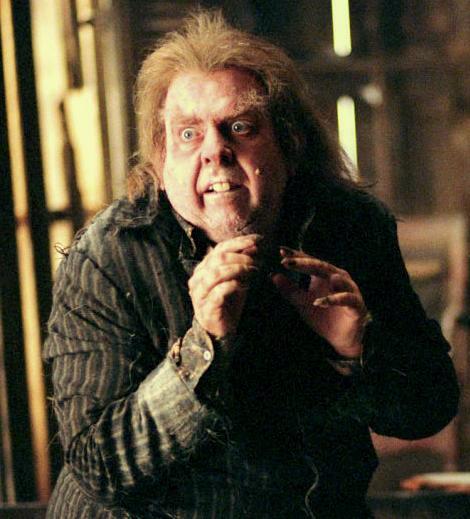 So again, the movie kind of forces too much emphasis on this twist but the book, thankfully, pulls this off wonderfully. Oh my gosh, there’s so many reasons why I like this twist. So like the Barty Crouch Jr. twist, we are given many hints at the true nature of this reveal such as the existence of Animagi (we first see this in Book 1 via Professor McGonagall), Scabbers/Pettigrew’s missing finger, and the Sneakoscope.

But what makes this twist very noteworthy is that it comes as a great, well-delivered gut punch! Okay, Sirius is revealed to be an Animagi. Oh crap! That’s crazy! That’s how he was able to do all his escape feats! And then we are revealed that Lupin is a werewolf. This is not as surprising because this is a bit more obvious given Snape’s lesson and Lupin’s health.

After thinking we have seen it all, the Scabbers’ twist comes out full force and we are shocked that this grown-man-turned-rat had been with Harry this entire time. Holy crap. I think this twist really hones in the fact that the Harry Potter series has layers of intertwining plot elements that are not contained within their individual books. Scabbers, this innocent, comic-relief character, is actually a back stabber and works for the Dark Lord. And of course, once this is revealed, Scabbers escapes and eventually finds Lord Voldemort and resurrects him. Not only does this twist has impact but it has consequences as it kicks off Harry’s war with Lord Voldemort. Damn I love Harry Potter.

The first Harry Potter twist and one that would set the twist benchmark for the rest of the series. First off, people new to the series would hopefully find this twist surprising in that there was a twist to begin with. Readers perhaps knew Snape wasn’t the guilty party, there’s a lot of emphasis on him after all, but perhaps readers were surprised that it’s Quirrell who Harry faces in the end. Poor, stuttering, Professor Quirrell. Nonetheless, J.K. Rowling does not insult the reader with this twist. Quirrell was there in Diagon Alley when Gringotts was broken into, he had a lively conversation with Snape, and Hermione bumped into him during the Quidditch game (which broke his concentration on Harry). Well played, Rowling.

Perhaps the one fault I have with this twist is the lack of impact it had on the rest of the series. Yes, Quirrell was mentioned occasionally here and there but nothing too meaningful or insightful. Before the final books were released, many fans guessed that Quirrell would return similar to other recurring elements. But surprisingly, he didn’t. This lack of series impact is unlike our final twist that forever changed the books…

Rosebud, Luke’s Father, “he was dead the entire time;” some twists are so iconic that we know them despite not even seeing the material. Snape killing Dumbledore is so iconic that it has reached this level of spoilers. It’s that good.

Why does Snape killing Dumbledore have a huge impact on us? I think the foremost reason is how so unexpected it is. You see, we were pretty sure Dumbledore would die in one of the last two books but what we didn’t expect was the method of his death. Most people probably guessed that Voldemort would kill Dumbledore (or Malfoy as they read Book 6). Snape killing Dumbledore though comes almost out of nowhere leading us completely aghast. And mind you, by the time Book 6 came out, Harry Potter was a global phenomenon that had die-hard fans combing through the preceding books. Nothing in those five books even hinted at this.

The second reason why this spoiler is so iconic is how much it changed the name of the game. Dumbledore is dead, Snape is a traitor, Hogwarts is no longer safe, and the Order of the Phoenix is in trouble. Harry’s fallbacks are gone or tattered and he can only rely on a few people now. Dumbledore’s death drastically changed the standard series’ plot in Book 7 as Harry Potter no longer lives at Hogwarts taking magic lessons; he is on the run, on a quest to destroy Voldemort’s horcruxes.

And to top it off, as a sweet cherry on this amazing twist, the reveal is iconic because how succinct it is. Snape Kills Dumbledore. You only need three words to describe this twist. And because everyone is already so familiar with the characters we were in dire peril of being massively spoiled for it. I’ve heard and read stories of jackasses driving up to Book 6 releases and shouting, “Snape kills Dumbledore” and driving off. Those people are the worst.

It’s because of this twist that Book 7 was heavily, HEAVILY guarded from spoilers. The series’ book artist couldn’t divulge anything to her husband, book stores clamped down hard on distributing books, the list goes on. When Book 7 was released, I read it as fast as I could and stayed away from the internet until I was done. Everyone was so wary of spoilers because of this twist. And because of that, I can think of no other twist that deserves the number 1 spot more than this one.

What do you think? Do you think these twists deserve their spots? What twists do you think I left out that caught you by surprise? Let me know in the comments section!