In the fifth, and what was then the last, season of Battlebots. A titan had fallen.

Hazard is one of the winningest Battlebots of all time, his record outshines other Battlebot winners, even Biohazard and Ziggo. Hazard received the Giant Nut again and again. He vanquished his foes in glorious fashion and won his battles if not by cruel knockout than by decisive ruling. The crowd, and myself included, loved Hazard. His language was destruction and his life was victory. He won against virtually every robot type. The builders who went against him were clearly nervous before each battle, anticipating what kind of irreparable damage he will work upon them. Everyone in the Middleweight class feared him.

In a field where robots are preened for intimidation or absurdity, Hazard stands out for being so unassuming. A drab, gray color blankets this square robot and a simple metal bar rests atop him while four ordinary wheels carries him forward. And the only thing designating his front is an unembellished sheet of metal that hangs limply from two axles. This modest robot was king and his house creed was “actions speak louder than words.” His long spinning bar overlapped his ground-hugging body, which meant if you wanted to flip him, you would get a face full of steel first. Lightweight, Heavyweight, Superheavyweight. Every class had its winners and favorites but only in the Middleweight was Hazard.

It is this record that makes his loss against T-Minus amazing. For Hazard to finally fall is breathtaking. But not only that, the reasons why he fall still affect Battlebots to this day and will probably continue to do so this year for the second ABC season. 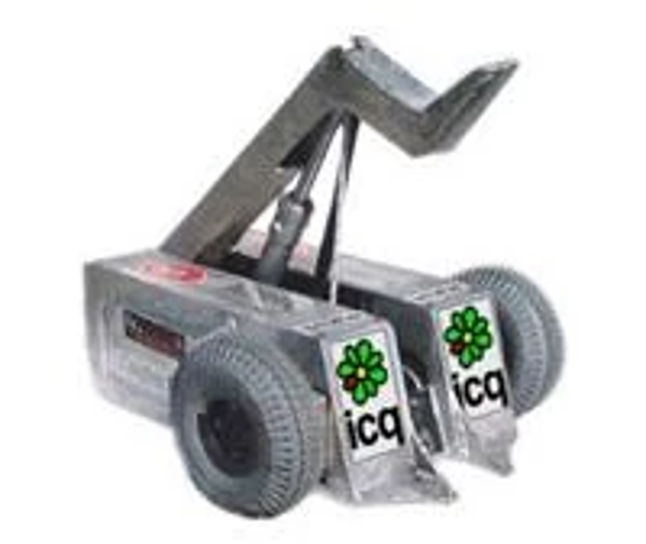 T-Minus, is like the younger…brother?…sister?…let’s call her sister…to Toro, a Super Heavyweight Battlebot. Their pneumatic flipping arms, whose power stems from CO2 cartridges, can toss their opponents skyward, incapacitating them once flipped. The big difference between the two is that T-Minus is in the Middleweight class, not the Super Heavyweight. As such, when T-Minus flips a robot, not only is it flipped but it is launched. The lighter robots aren’t as constrained to gravity as their heavier cousins and as such T-Minus could toss them to six feet in the air! T-Minus is so powerful that if T-Minus finds herself upside down, she can easily right herself up thanks to her arm (give or take a few tries). T-Minus, like her fated opponent, had a reputation of delivering KOs to many that challenge her. Yet, unlike Hazard, T-Minus did not win by carving, bashing, or mauling her opponent, but by simple incapacitation. One flip upside down or onto the hazards and her opponent was done.

Sometimes, that wasn’t enough; some Battlebots are just unflippable. No matter how many times T-Minus flipped her opponent, they wouldn’t stay down. But T-Minus didn’t care. If that happened, she became aggressive. Flip them, flip them, flip them again, onto the spikes, the screws, and the saws. She owned the fights. She was in command. She also knew, or I guess I should say her drivers knew, when to be cautious against a dangerous opponent; a skill that not many respect or have the patience for.

And in this case, if there was any robot destined to beat Hazard, it was her. Hazard is flippable; one flip onto his back and he is done. But fate wasn’t kind to T-Minus. T-Minus made her first debut in season 3 (in what I would argue was the best Battlebots season yet) and delivered one of the best battles that season, her fight against Sunshine Lollibot.

If you want to show anyone the true power of T-Minus, show them this video. Simply amazing. Her power, dominance, and playfulness are all neatly shown. That was T-Minus. She seemed like a dragon in a way, almost every launch she given was accompanied by a belch of smoke from her steaming body. Unfortunately, she lost in the quarterfinals to another Middleweight favorite and newcomer, T-wrex.  T-wrex continually fended her off and scored many consecutive hits which prevented T-Minus from doing any real damage to him.  A lucky hit by T-wrex disabled T-Minus’ radio communications causing her to be unresponsive and thus, counting her out.

Bad luck continued to follow her in season four. After KOing Ravager and Short Order Chef, T-Minus faced Heavy Metal Noise. I won’t lie, this fight was probably one of her worst ones. After a few blow exchanges, Heavy Metal Noise struck T-Minus’ fail-safe and she was incapacitated. If she had won the fight, she would’ve faced Hazard in the following round. It wasn’t until Season 5 that T-Minus got her shot of redemption. It doesn’t matter who she fought. What matters was that she won them handily and her opponent was Hazard.

For all my talk on T-Minus I only briefly mentioned Hazard. In all honesty, Hazard deserves an article all to himself and his accomplishments. He has fought many battles, some were close, many were not, and he had won them again and again. He was the Middleweight champion in season one, three, and four (he didn’t participate in two), and he had not lost a single battle yet. That’s impressive. There are so many wonderful battles he fought so I mean, take you pick!  Hazard vs. Little Drummer Boy, Sabotage,  Blade Runner.  Any one of these battles and more are great!  I like this one when he faced off against Misty the Wonderbot.

So when Hazard and T-Minus faced off, who would’ve guessed that Hazard was going to fall? This wasn’t like the almost predestined match between Biohazard and Son of Whyachi. This was the semi-finals for two veteran robots, one of whom had never been to the championship and neither of which had ever fought one another. Why should we care?

Well, we did, after we saw the short but decisive battle.

T-Minus won. After sparks flew in the air, T-Minus landed an imperfect blow to Hazard. The flip launched one of Hazard’s flaps upward, jamming it against Hazard’s very own weapon. T-Minus second blow would not missed. Hazard was flipped and the match was over. If T-Minus was any closer in delivering the former blow to Hazard, she could’ve been seriously injured and missed her chance. The imperfect flip saved her.

I think the biggest takeaway from this match is that no Battlebot is perfect. There will always be someone out there who can defeat you. And in this case, the only reason why T-Minus could triumph over Hazard was because she was low enough to the ground to get under him and strike at his weak spot. And how did she accomplish this? Through the ingenuity of her creators and their craftsmanship from behind the scenes.

I think one thing that doesn’t get enough appreciation in Battlebots, especially in the most recent season as of this writing, is how effective a simple change in the design of a Battlebot can have on a match. I’m not familiar with intricate rules, but I know that some modification of your robot is allowed between matches. This was how Alpha Raptor won its battles. Alpha Raptor’s crew modified and changed their robot to accommodate their opponents and it helped them win.

But there’s one other factor here and that’s luck. Luck was handed to T-Minus when Hazard’s own skirt disabled him. Hazard was defenseless and T-Minus did not let this opportunity slip by. Luck was always against T-Minus in the previous seasons but now it was luck that offered her the win. Luck and skill are why certain battles go the way they do in Battlebots. Trust me, I can attest to that. Trying to predict who will win in Battlebots is somewhat difficult.

I guess that’s why Battlebots can be so entertaining. Even when you are sure that a Battlebot will win, a T-Minus is thrown in the equation and we stumble. We live for T-Minus. For that one thing, or I guess I should say robot, that breaks tradition and rebuilds it into something even better.