Recently, in my Herpetology class, my professor informed us about a recent revelation in turtle evolution.  The turtles’ closest living relatives are in fact, birds and crocodiles (collectively known as the archosaurs to which I’ll refer to this as the archosaur hypothesis).  This is quite different from what I learned while growing up mainly that turtles were a weird outgroup of reptiles (see the figure below).  This was even commonly accepted in the scientific community.  Intrigued that a major shift in the Tree of Life has happened, I listened intently.

Again and again and again, we see continual support for the archosaur hypothesis from various different research groups analyzing various different genetic components.  I thought this was cool, but my professor by the end of his lesson seemed more annoyed then gratified by all this research.  Yes, alright, we get it, turtles are a sister group to archosaurs, move on.

But I had an appreciation for these scientists and their experiments.  This is science at its best.  We have rigorous testing of a novel hypothesis that has shaken traditional knowledge.  And through this rigorous testing, again and again, the hypothesis stands strong. 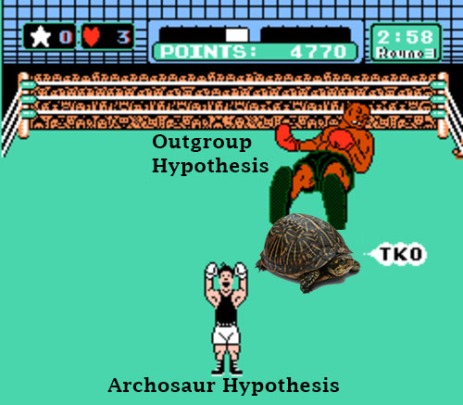 This may seem odd to praise repeated testing, but lately, science, particularly pharmaceutical science, has been faltering lately.  If you have the time, you should definitely read the article here which highlights how repeated testing has taken a backseat in modern science.  Why is that?  Well, as the article states, it could be that the scientists want to make a name for themselves by testing new things, or journals may have no interest in repeated testing, or it’s just too costly.  Any of these could be a factor.  This lack of critical, unbiased repeated testing harms science as certain information we could perceive to be correct could actually be false due to human error.

As such, in the space of about two decades, we see a great example of how our perception of science can change from one standpoint to another.  First, we have a generally accepted hypothesis (turtles are an outgroup of reptiles).  This was then challenged by a few scientists (turtles are actually relatives of archosaurs).  Finally, it ballooned to many scientists coming forth and supporting this new hypothesis through repeated testing.  To me, I find this awesome.  And that is why, my friend, turtle science, is good science.