One of the most predictable and used tropes for anime, and in general other media, is the Childhood Sweetheart Trope (CST). A pre-ten year old boy and girl meet each other for the first time, acquire puppy love, and then are tragically separated due to extraneous circumstances before they meet up again as young adults. They fall in love again through a series of mishaps or adventures and then get married. There can be some fidgeting with this but for the most part this is basically the sub or main plot for a lot of romantic/semi-romantic anime ranging from the humorous Love Hina to the very gruesome Elfen Lied.

I am critical of this trope though for several reasons besides its foreseeable conclusions. One is that the characters, especially the female ones, are quite dull or one sided and have no overall personal goals or conflicting feelings that paint them as actual people. Two is that we as the audience already expect them to get together and thus when we see the boy or the girl dating someone else we know it will end badly. Three is that the trope has a very predestined feel behind it, especially if the boy and girl make a marriage promise, as the girl and boy are fated towards this end result no matter what they do. Finally, the girl characters are treated like rewards or trophies for the boy, especially if we primarily follow the boy’s POV, and not as actual humans.

Now I know this is not always the case (e.g., Elfen Lied) but CST is certainly prevalent in the story telling community. As such, I want to discuss two stories, the DS game 999 and the visual novel game/anime Danganronpa, and their unique interpretation of this dry trope. These two stories have an interesting approach to this tired theme and I wanted to gush why I think these two nailed it (and of course, spoilers).

Lower row, directly in the middle is Makoto and to his right is the blue-haired Sayaka. Image from http://www.egmnow.com/articles/reviews/egm-review-danganronpa-trigger-happy-havoc/#

Let’s start with Danganronpa, our main character, Makoto Naegi, likes Sayaka Maizono, a pop idol girl, whom he became acquainted with in middle school. The two hadn’t seen each other until the events depicted in Danganronpa and they hit it off well as they’re the only people they’re familiar with in the whole cast of characters. There is an implied mutual attraction and support between the pair.

Though they didn’t know each other before middle school, this is still the CST at heart as they were separated at a young age before being reacquainted several years later. When the terrible events of Danganronpa unfold, the story seems to set up the notion that their relationship will only get stronger before they become an actual couple.

However, this does not happen as a fellow student murders Sayaka and as such, we see the first twist Danganronpa offers for the CST. Makoto and Sayaka’s relationship will not blossom but Sayaka now becomes a martyr for Makoto, a beacon to for Makoto to triumph in the end.

Although Sayaka’s death may be inspirational, she is still a rather flat character. That was the case until an episode after her death revealed her hidden intentions. Sayaka, in all her innocent goodiness, was planning on murdering a fellow student and then frame Makoto for it. Of course, the murder doesn’t go as plan and she got murdered instead. This shocks both Makoto and us the viewer. We are set up at the beginning that Sayaka would be an innocent, loving girl and yet her actions had proved otherwise. Why did she do it? Well, we’re shown in the previous episode that her band members were severely hurt/already dead and probably would not be saved unless she murdered someone and successfully got away with it.

Her reasons for murdering actually seem sensible (besides, you know, the whole murder thing). Her band members are in grave danger and she has known them for years, they’re probably like family to her! Seeing them in peril prompted her to act the way she did so she could try and save them. She tricked Makoto into switching rooms with her, lured a student to the said room for the promise of teaching him music, and then attempted to murder that student and blame it on Makoto. Since she barely knows Makoto, she didn’t have any strong emotional attachment to him and thus didn’t have a problem in framing him for murder. I actually want to see an alternate universe where she did murder the student and and how Makoto would react to that.

Though I kind of thought she would be the first one to get murdered, I definitely did not see her ulterior motives coming and was nicely surprised by it. These first few episodes definitely set the tone for the rest of the series. Well played, Danganronpa. 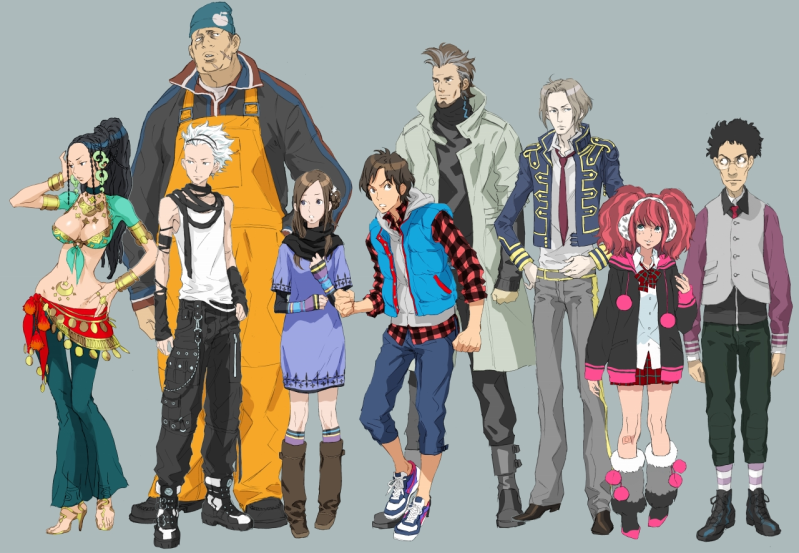 Guy in the middle frame with the blue vest is Junpei and to his right is Akane.  Image from http://zeroescape.wikia.com/

Nine Hours, Nine Persons, Nine Doors just takes this trope though and blows it out of the water. Now, this game has so many ideas, themes, and morals behind it that I try to find any excuse to talk even just one of them. In this case, I want to talk 999’s interpretation of the CST as it’s just amazing.

Our main character is Junpei, a 21-year-old college student who is found on a rigged-to-blow cruise liner and must play the “Nonary Game” in order to escape from it. He meets eight other characters after escaping from his cabin room, one of which is Akane Kurashiki (alias “June”), whom he knew when they were kids. IMMEDIATELY, when Junpei explained who she was I was like “Ah, crap, here we go, another Childhood Sweetheart story.” I was not looking forward to Akane and I actively avoided her early on in the game. She seemed like such a flat character, another one of those innocent, sweethearts or whatever.

Well, as you may know, there are multiple endings to the game. After the first time through (I died of course), I went a different route but this time I actively engaged with Akane more often.

Holy crap, she’s funny, and a bit crazy too. Her sexually suggestive quips embarrassed Junpei (lol) and her crazy metaphysical concepts made him question her sanity. I was happily surprised how untypical she was while I was playing the game.

In fact, the more I played the game the more I realized that there was something really special about Akane but I couldn’t figure out why.

And then, wham, I came across the true ending to the game and my mind was blown. It was revealed that all along she was the one behind the “Nonary Game” and it was all an elaborate setup to not only get back at the people who hurt her ten years ago but also to save her from her own death.

Okay, where to begin.

When Akane was a kid, she was trapped in a room that was going to burn her alive. Her only way out was to solve a puzzle that she didn’t know how to answer. Her only way out was to telepathically communicate Junpei and have him solve the puzzle instead. How? Well, this is the part where things get crazy. One of the themes of the game is that the past is set but the future has multiple paths laid out. Akane tapped into that idea by communicating to Junpei ten years in the future and have him solve the puzzle instead. Her future self created an environment that was exactly similar to her past’s environment. This allowed Past Akane to look into the different future paths and try to steer Junpei to the puzzle that she could not solve. This is why the game has multiple endings (which blew my mind, this game did that a lot for me), Akane is trying to find that perfect ending. Once Junpei figured out the puzzle in the exact same environment, he telepathically communicated the answer back to past Akane and then she was able to figure it out.

There are internet articles out there that like to deconstruct this concept into pieces and explain why this is so amazing so I won’t go into that. But what I do want to say is that all of this…the telepathy, the puzzles, the multiple endings, and the character herself just utterly destroy the CST. Whether done intentionally or not, 999 builds up CST and then just tears it down piece by piece and I really liked that. It’s not often that a storyteller has effortlessly guided my initial opinion of a character into making me think one way of them and then pull the rug from me and reveal what truly lies there. So good.

Okay, so what do these two stories have in common?  Why do I like them both?

Both of them set up the boy and girl’s relationship very casually, almost as if they were simply cookie-cutting the trope into their twisted plots but still keeping true to CST.  In Danganronpa, Makoto and Sayaka would get out of the murder game alive and become a couple; in 999, Junpei and Akane defeat Zero through the power of a emerging love.  However, this does not happen.  We are given a scenario where both Sayaka and Akane have ulterior motives and are trying desperately to win no matter what the costs.  We see what makes them tick and why they acted the way they did.

I guess what I’m trying to say is that these two females felt like actual people to me.  They feared, they planned, they made hard decisions, and they are not defined by simply trying to find that special someone or being in love.  That may be a part of them yes but it’s not the full picture.  I really liked that but it’s unfortunate that these characters stood out to me because they directly oppose a rather flat trope.  Regardless, because of their actions, they are what help make 999 and Danganronpa great as they took this trope and punched it right in the face.  Now that is awesome.

Unapologetic Nerd will be on hiatus next week in preparation for an extensive Star Wars article for Star Wars Day.  It will focus on one of my favorite novels in the series.  Don’t forget to check it out!