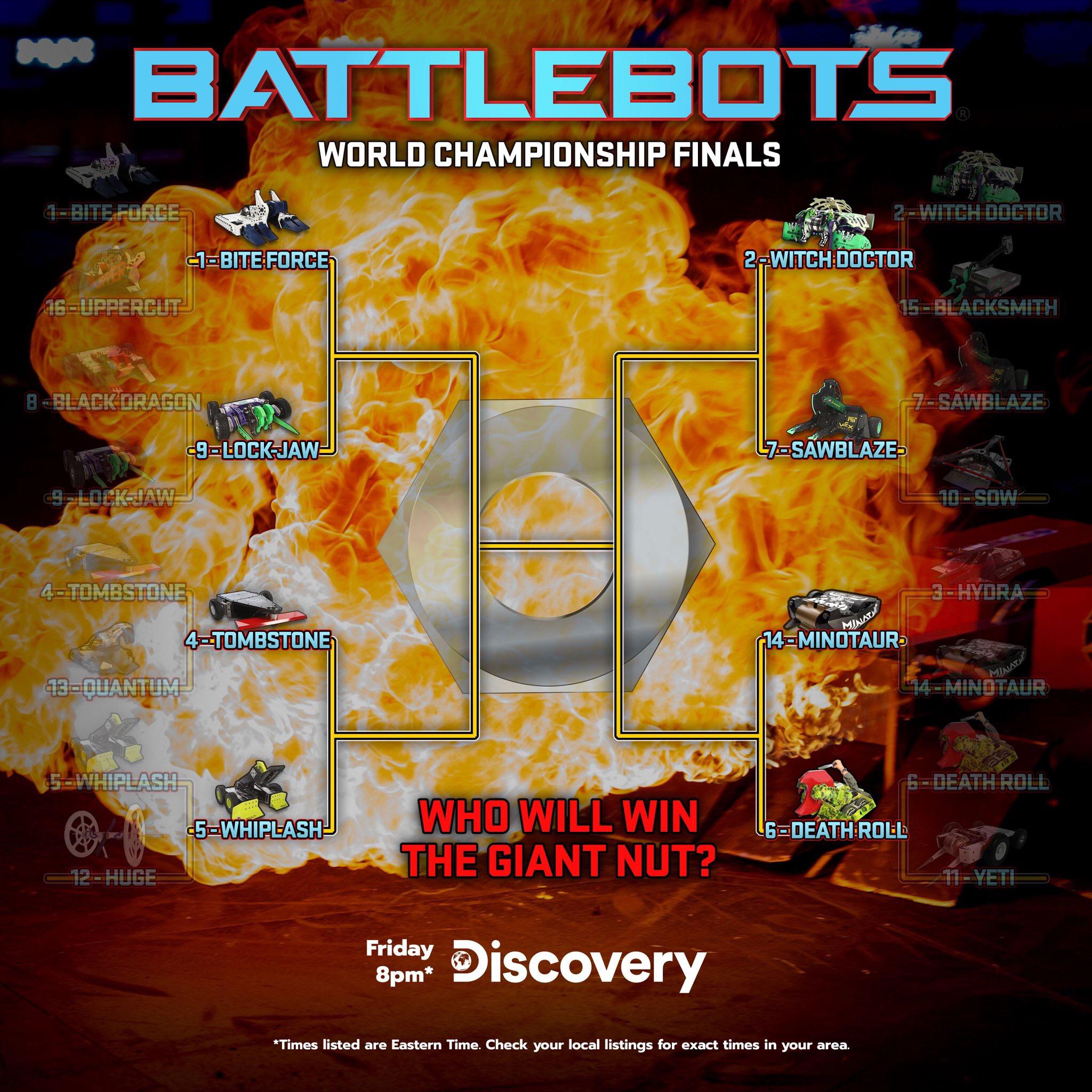 Man, this was a rough bracket to fill.

With so many good robots participating this year I struggled picking which bot would advance and which would go home.  Nonetheless, I am (mostly) confident that Witch Doctor, if not Tombstone, would be the winner of this year’s Battlebots.  Let’s take a quick look at my reasonings.

Sweet Sixteen
Biteforce vs. Uppercut- Biteforce by KO in less than 2 minutes
Biteforce has been a near unstoppable force this season while the rookie Uppercut has struggled to deliver satisfying KOs.  I think Biteforce will end Uppercut in less than two minutes and move on unscathed.

Black Dragon vs. Lockjaw- Black Dragon by UD
This was a tough call for me as these two bots have shown sturdiness and ability to deliver strong hits.  But who to choose?  Rookie team from Brazil or the veteran driver?  Based on Black Dragon’s last four matches, I’m giving it to Black Dragon for a mild upset.  I think both bots will be aggressive and have nice control but BD will win by Unanimous Decision by the Judges.

Tombstone vs. Quantum- Tombstone by KO, 1:20
Now, I can see Quantum winning like it did against Valkyrie by tanking hits and pushing its foe around the arena until the bell rings.  But Tombstone…is no Valkyrie!  That weapon is crazy dangerous and I think no amount of bite force will save Quantum.  I bet Quantum’s jaw will even go crooked like a sad croc when its done from this match.

Huge vs Whiplash- Huge by UD
Huge has improved so much since last season to the point that if you’re not a horizontal spinner than you’re in for a bad time.  If it wasn’t for the Hypershock vs Huge match I would’ve given it to Whiplash but now…I have to give it to my man, HUGE!  Whiplash will have difficultly controlling the match while Huge will just wail at it until its bruised, bruised, bruised.

Witch Doctor vs. Blacksmith- Witch Doctor by UD
Blacksmith’s luck may have turned in the nick of time by the end of the season but I’m afraid his luck will run out against the 4-0 Witch Doctor.  The hammer hasn’t been shown to be too effective and it would be hard to accurately pound the very agile Witch Doctor.  I think Witch Doctor won’t be able to KO Blacksmith but it will still win the match easily.

Son of Whyachi vs. Sawblaze- SoW by KO, less than a minute
Yes, I know, I know, SoW can be flipped and KO easily but I honestly think it can damage Sawblaze to the point of destruction before it could have a chance to flip it.  That saw is just begging to be torn and bludgeoned off.

Hydra vs. Minotaur- Hydra by SD
This will probably be the closest match for the Sweet Sixteen.  Minotaur is basically unflippable and Hydra would have to win by flipping Minotaur out of the arena, which is entirely possible, or by simply dominating the match by flips after flips.  Minotaur can easily win though by aggressive and chipping away from all sides.  However, I honestly can’t see Minotaur do too much damage due to Hydra’s low design and smooth armor.  I think Hydra will win if by Split Decision if it can’t flip Minotaur out.

Death Roll vs. Yeti- Death Roll by SD
This was also a very hard match to decide and if it was any other year and even six episodes ago I would have easily picked Yeti…but now…?  I don’t know…I feel like Death Roll has been such a chaotic force this year that I think it will be this bracket’s Dark Horse.  Yeti on the other hand has been…alright…not great but good.  I think Death Roll will do some crazy upset that will throw everyone for a loop by damaging Yeti until it starts smoking by the end of this match.  Weirder things have happened this season.

Elite Eight
Bite Force vs. Black Dragon- Black Dragon by KO in 2:35
That’s right!  I’m calling it here!  Bite Force will lose to Black Dragon in a surprise upset!  The desperado team will continue their wins by a long but strong match against the champion.  There will be many clashes and collisions and both bots will be heavily damaged but I think Black Dragon will throw us for a loop and flip Bite Force onto its back and win with a KO.

Huge vs. Tombstone- Tombstone by KO, less than a minute
There are two bots in this bracket that can defeat Huge, Tombstone and SoW.  If Huge doesn’t fight them he will win.  But unfortunately, Huge will have to fight Tombstone and he will lose to that ferocious horizontal spinner.  Perhaps Huge will have a different set of wheels than what we’re used to but I think it will be fruitless against the former champ.

Witch Doctor vs SoW- Witch Doctor by KO in about one minute
Witch Doctor and Death Roll are this season’s most improved bots.  I think Witch Doctor will continue her reign by defeating another improved bot, Son of Whyachi.  Witch Doctor’s record can be spotty, yes, but I think this will be one of those matches that will be done in less that five hits.  One solid hit by Witch Doctor’s vertical spinner will send SoW up…and onto its back.

Hydra vs Death Roll- Hydra by KO in 1:40
However, Death Roll’s luck will end here.  With two 4-0 bots fighting each other someone has to bow down and it will be Death Roll.  I think Hydra is just too experienced and intense for Death Roll to handle.  Death Roll will have a hard time damaging Hydra and a few good flips from Hydra I think will wreck Death Roll.

Final Four and Championship
Black Dragon vs. Tombstone- Tombstone by KO in about a minute
Black Dragon will be the talk of the town as the rookie who made it to the semi-finals.  However, it will fight Tombstone and, unfortunately, the Duck’s good luck powers will run dry.  Tombstone will wallop and destroy Black Dragon with a quick KO.

Hydra vs. Witch Doctor-Witch Doctor by JD
I think some of you might say I’m inconsistent here with Hydra beating Death Roll and Minotaur but lose to Witch Doctor.  You are…correct!  But!  Witch Doctor has been really good this season!  Reddit likes to shit on Witch Doctor (which was very much undeserved even before this season) but it’s a good bot on a good team!  I think Witch Doctor is sturdy and strong.  I think it has a good shot of taking down Hydra by chipping away, avoiding the flipper, and controlling the match.

I rest my case.

And as a bonus, here is Mary’s bracket!